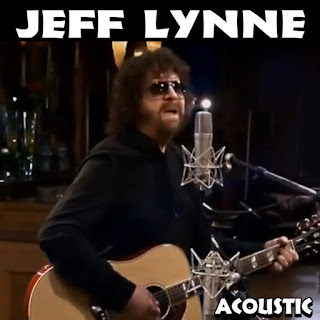 Jeff Lynne is best known as the lead vocalist and main songwriter for ELO (the Electric Light Orchestra). ELO is known for combining orchestral arrangements with rock music. As a result, sometimes the band has been criticized for overly lush production. I can see that point, but I also sometimes find charm in the "everything but the kitchen sink" approach.

That said, if you've followed this blog for long, you'll have noticed I have a particular fondness for acoustic music. Lynne is a talented songwriter with many hits to his name. It would be nice to hear some of those songs in stripped down versions. But whenever Lynne has played live, either solo or as part of ELO, he's used a full-band style.

I've only found a few exceptions to that, where he played in solo acoustic mode, and I've gathered them all here. In 1990, as part of a radio station interview, he played two classic cover songs that had influenced him, "Runaway" (by Del Shannon) and "It's Over" (by Roy Orbison). In 2001, he played two more songs, "Can't Get It Out of My Head" and "Ordinary Dream," for another radio station appearance.

Most of the rest of the songs here come from a 2011 reunion of Lynne with Richard Tandy, who was in ELO from 1971 to 2001. Lynne generally played acoustic guitar and sang while Tandy played the piano. The vast majority of the songs on this album are officially unreleased, except a couple from this performance. The whole thing was professionally recorded in a studio and a video of it was put on the Internet. But only a few songs from it have been released, and generally on obscure things, like Japan only bonus tracks.

The last song, "Livin' Thing," was recorded in 2012. For some reason Lynne only performed about a minute of the song. But he did just enough to end with a repeat of the opening chords. So I edited that minute-long version into a two-minute long version by repeating the whole thing and then adding some more of the opening chords for a fade out. Hopefully, it's enough to make it feel like a full song and not just a snippet of one.

I think it's a wonderful revelation to hear these songs in such a stripped down form. The one downside to this album is that it's rather short, at only 32 minutes long. Normally, I don't like to include two versions of the same song on one album. But since this album is short, and Lynne so rarely does any acoustic versions at all, I've included two versions of "Can't Get It Out of My Head" here.

For the cover art, I took a screenshot from one of the videos of the 2011 performance with Tandy that I found on YouTube.