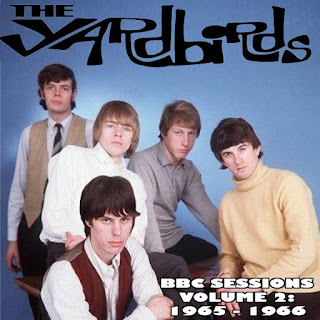 Yesterday, I posted Volume 1 in this series of three albums of the Yardbirds at the BBC. I sorted out all three albums at the same time, and I'm keen on posting them, so here's Volume 2 already.

This album represents the peak of the band's popularity. As a result, they were able to have many BBC sessions. As I explained for Volume 1, when I had the choice of different versions of the same song, I went with the one with the best sound quality (assuming the band's performances would always be solid). So that's what you'll find here. But I've gathered the other versions and will post those later.

Although there are no songs repeated on this album, the first two songs also appeared on Volume 1 in this series. That's because the versions of Volume 1 featured Eric Clapton on lead guitar. These versions feature Jeff Beck instead, and I figure that's a big enough difference to include them here and not on the repeats album that will come later.

You may note that six of the songs have "[Edit]" in their names. Those are the cases where BBC DJs talked over parts of the music. Using the X-Minus audio editing program, I was able to wipe their talking while keeping the underlying music.

All the versions here have been officially released. But I was able to use the work of Yardbirds fan DocDandy to select the official releases that sounded the best for each song.

Generally speaking, the band liked to frequently promote their best known songs, like "I'm a Man" and "Shapes of Things." But there also are some rare songs here where the only recorded version known is the BBC one, such as "The Stumble," "Dust My Blues," and "Baby Scratch My Back."

The previous volume in this series has one song that doesn't sound as good as the others, and the next volume has one like that too. But all the songs in this volume sound great.

The album cover photo was taken in early 1966, while Jeff Beck was in the band, but before Jimmy Page joined. (The two lead guitarists were in the band together for a few months.) Also, Beck is the one sitting at the bottom in front of the others. Originally, he was much lower, so only his head was showing. But I used Photoshop to raise him up. I think that improved the composition of the photo.