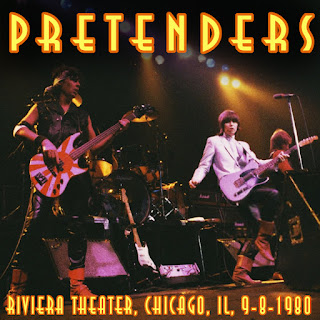 This week as I write this (in November 2021), 40th anniversary deluxe editions of the Pretenders' first two classic albums ("Pretenders I" and "Pretenders II") were released. I think those releases had a lot of good things included, but when it comes to live material from 1980, they didn't do the best job. They included a 50-minute-long concert from Boston, and 24 minutes of another concert from New York City. Both of those shows sound just fine, but they largely have the same songs.

Personally, I prefer this concert from Chicago. It was professionally recorded so it could be played live on the radio. As a result, it sounds every bit as good as those two shows included on those recent releases, but it's significantly longer, at an hour and 13 minutes. As result, it includes more of the lesser known songs of that time period, instead of just the expected hits.

I like everything Chrissie Hynde has done, with or without the Pretenders, all the way to the present day. That said, there was something special about their music from their first few years. In my opinion, virtually every song from their first three albums is a classic, and even some of the non-album tracks are great. The original members of the Pretenders had a special chemistry, so if you want to hear this band live, it's hard to beat this concert.

Although this is a bootleg, there were virtually no problems with the recording. The only snag is that, since it was taken from a radio broadcast, DJs tried to talk everywhere they could. Happily, there was no talking over the music, but there was some during times of prolonged audience cheering. I removed all the DJ talk and made sure there was a decent amount of cheering whenever it was expected.

As an aside, I've just redone all the links for all the Pretenders / Chrisse Hynde albums I've posted so far. I did so to fix the volume balance between songs as well as changing how the mp3 tags are done. So if you care about that sort of thing, you might want to redownload them.

I couldn't find any great color photos of the band in concert from 1980. However, I did from one from 1981, a concert at the Lyceum in London, so I used that.