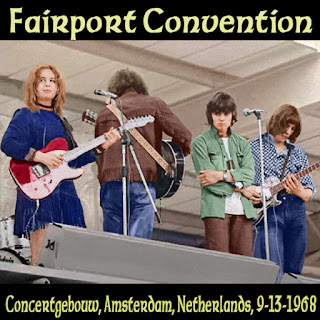 Fairport Convention has made a lot of great music over the years, and they're still going as I write this in 2021. But for me, their peak was in 1968 and 1969, while they had both Richard Thompson and Sandy Denny in the band. This version recorded many songs for the BBC that survived, but until relatively recently, I never knew of any actual live recordings that had survived in good quality.

The good news is, such a thing does exist, in the form of this bootleg. The bad news is that it's quite short, at only 22 minutes long. But still, that's better than nothing. Only one song from this concert has been officially released. "Mr. Lacy" came out on the relative obscure compilation "Fairport Unconventional." But that version sounds the same as the bootleg one, so I used the same source all the way through.

I had refrained from posting this concert here because the sound quality was pretty rough. But the main problem was that the vocals were too low. Now that I'm using the sound editing programs Spleeter and X-Minus, I realized this is another concert I could improve. I'm not marking the songs with "[Edit]" because every track was edited with one of those programs, even the talking tracks to lessen the hiss there.

The end result? Okay, it's still rather rough. But it's markedly better than before, and I think it's very listenable. It certainly sounds better than I'd expected for any live recording of the band from 1968. The key is that these songs were recorded by the Dutch TV network VPRO and played on TV at the time. There clearly was more to the show, since the band mentioned coming back for a second set. But this is all we've got, in any form, thanks to it getting on TV.

Iain Matthews does all the talking between songs. Matthews and Denny do most of the singing, though Thompson sings lead on "If It Feels Good, You Know It Can't Be Wrong." It's also interesting to hear how very small the crowd was. Based on the applause, it sounds like only a dozen or two people

There's one other bootleg of this band from 1968 that I know of. The sound quality is significantly worse. It's a short recording from the Whittlesey Barn Barbeque two months before this. Most of it isn't listenable for my ears. But I rescued one song from it that sounds passable, helped by the fact that I boosted the lead vocals for that one too. It's a cover of Bob Dylan's "It Takes a Lot to Laugh, It Takes a Train to Cry." I'd added that as a bonus track.

Oh, regarding the date of this concert, it may or may not be true. This bootleg is generally listed as taking place in September 1968. I dug a little deeper and found the band's visit to the Netherlands that month was very short, from September 11th to September 14th. The show could only have taken place on the nights of September 12th or September 13th, so I guessed!

It Takes a Lot to Laugh, It Takes a Train to Cry (Fairport Convention)

I couldn't find any color photos of the band in concert in 1968. I decided the world needs at least one, so I colorized this one. (Heck, I was happy to even find a decent black and white one.) Apparently, it's from the summer of 1968. I assume the personnel from left to right is Sandy Denny, Richard Thompson, Iain Matthews, and Ashley Hutchings. Thompson has said he was very shy at this point in his career and often played his guitar solos with his back to the audience. It looks like this is such a case.