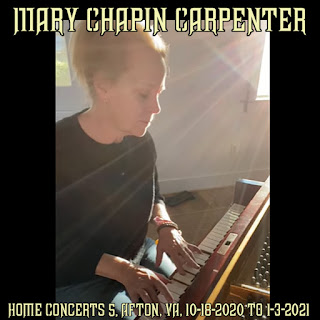 Here's the fifth out of six home concert albums from Mary Chapin Carpenter. She started doing this in early 2020 and continued into early 2021. The songs here are chronologically ordered, as usual, and just barely dip into 2021 on the last song.

As with previous albums in this series, Carpenter played solo acoustic and talked a fair amount before each song. But also like those previous albums, I cut her talking down quite a lot, removing repetitive parts she said before each song as well as updates about her pets, and keeping the parts relevant to the songs she was playing.

For the last album in this series, I spent most of my write-up talking about the sound program created by the dog's squeaky toy. I'm glad to report that that toy didn't make much of an impact on this album. I think the only song where it can be heard is "Keeping the Faith." But luckily that was mainly during instrumental parts that were repeated, so I was able to eliminate most of the squeaking by replacing one part with another from elsewhere in the song. There's only a little squeaking at the last few seconds. There also is some squeaking in a couple places during the comments, but not enough to be annoying, in my opinion.

I believe there was only a single time Carpenter played piano instead of guitar during this entire series, and that's here, on the song "Thanksgiving Song."

As mentioned above, Carpenter made rare use of the piano on one of the songs here, so I took a screenshot of her at the piano on that song and used it for the album cover photo. The resulting image was rectangular in order to fit both the piano keys and her head into the frame. So I have some black space on both sides.