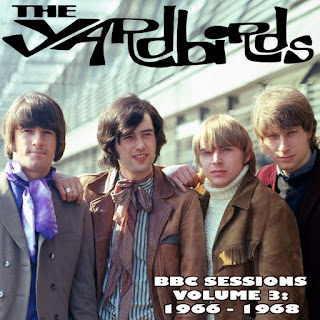 Here's the third and final volume of the Yardbirds at the BBC. However, I made one more album of all the additional versions of songs the band did more than once for the BBC. I can post that here as well if there's interest.

The first three songs here, from June 1966, feature Jeff Beck as lead guitarist. Shortly afterwards, Jimmy Page joined the band, and the band coexisted with two lead guitarists until about November 1966. Unfortunately, none of the performances here are from that period. Instead, from the fourth song to the end, it's just Page as lead guitarist.

So this should be of interest for Led Zeppelin fans, since of course Page would be the lead guitarist in that band starting in late 1968. In fact, if you're a serious Zeppelin fan, you probably know that band was billed as the Yardbirds when they first started out.

Speaking of Led Zeppelin, if you listen to "Dazed and Confused" here, you'd be forgiven if you'd think this is Led Zeppelin already, but with a different lead vocalist. "White Summer" is a song that band would play in concert sometimes. And this version of "Train Kept A-Rollin'" has some parts that sounds like another Zep song.

By the way, "Train Kept A-Rollin'" and "Jeff's Boogie" are songs that were featured on earlier volumes in this series. I've included them here both because those earlier versions were separated in time by a year or more, and also because the soloing is significantly different from version to version.

The sound quality is generally excellent. The one exception is "Rack My Mind." It's the only song here that is officially unreleased. But I've included it because it's a very rare song for the band to have played live, and I think the sound quality just barely makes the cut.

Six of the songs were hindered by the usual BBC problem of DJs talking over the music. (They're the ones with "[Edit]" in their names.) But I used the X-Minus audio editing software to wipe out the talking while keeping the underlying music.

The cover art photo is from 1967. You may recognize Jimmy Page - he's the one with the brown tie and the blue striped shirt.