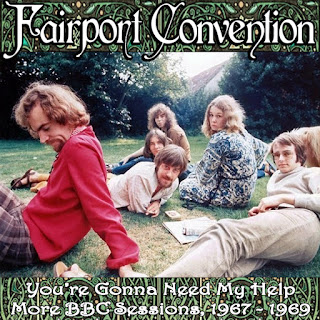 A few days ago, I posted a Fairport Convention concert from 1968. That reminded me that I have another album of the band playing for the BBC that I haven't posted yet. The reason I didn't post it until now is because these are all songs they played for the BBC on other occasions, which I have posted. So these are extra versions, basically. However, the sound quality is generally excellent (with a couple of exceptions), and any 1960s music from this band is good, in my opinion. So here it is.

All but three of the versions here have been officially released. The three unreleased ones are "I'll Keep It with Mine," "Percy's Song," and "You're Gonna Need My Help." But they're from BBC sessions, and they sound as good as the others.

Ironically, the worst sounding song here is the last one, "A Sailor's Life," even though it has been released. It's the only live performance here, from an unknown location in 1969.

One of the songs, "Fotheringay," has a BBC DJ talking over the intro. But I've used the audio editing program X-Minus to wipe out the talking while keeping the underlying music. That's why it has "[Edit]" in the name.

I'm making a concerted effort these days to use these new audio editing programs to redo ALL the BBC performances that had DJ talking over the music. I'll be writing more about that later. But note for now that not only did I fix this one song on this album, but in recent days I've fixed all such instances on all the Fairport Convention albums I've posted. Furthermore, I fixed the volume balance between songs, and redid the mp3 tags. So you might want to redownload everything from this band for some improvements here and there.

I also renamed all the band's BBC albums, adding "Volume 1," "Volume 2," etc... I updated the cover art with these changed names too. This one doesn't get a volume number, since it's extra versions that are not in chronological order like all the other albums in the series.

There aren't many good photos of the band from around this time period. I used a photo taken from the same photo session as the album cover for the "How to Treat Another Heart" stray tracks album, taken in Sandy Denny's parent's backyard.