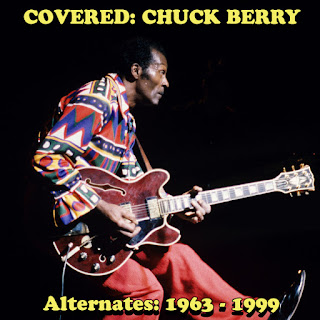 Here's something that's a fun extra. I highly doubt I'm going to do this for any other artist in my "Covered" series, but it somehow seems fitting here.

In putting together my three albums of songs written by Chuck Berry, I searched the Internet and found a surprising number of "best Chuck Berry covers of all time" lists, and I used those to point me to the best versions. The only problem is, there are simply too many excellent versions of the same songs. In my cases, it was a flip of a coin type thing to decide which version to use. Over time, I developed a folder of "almosts." When I was all done, I took another look at that folder, and realized those songs would make for a very good album all by itself. So here it is.

Some artists are so heavily influenced by Berry that you could put together an entire album just of that one band doing covers of his songs. The Stones are one such band. I think they've done about 15 of his songs, if you include unreleased live performances and the like. There's a similar number for the Beatles. Pretty much all the Stones and Beatles versions are great, as you'd expect by such great bands. So my apologies for not including more by both bands.

Oh, one last point I forgot to mention on my posts for any of the other albums. A few songs people closely associate with Berry weren't actually written by him. Probably the most obvious case of this is "Run Rudolph Run." Berry was the first to record it, but it wasn't written by him, so it doesn't fit into this series. There are a couple other cases like that, such as "Don't You Lie to Me" and "My Ding-a-Ling."

By the way, the Georgia Satellites and Tom Petty versions here are officially unreleased, I believe, but their sound quality is still high.

If you know of any really great Berry covers that I missed, please let me know. If they're really great, I could always update the song list, at least for this album.