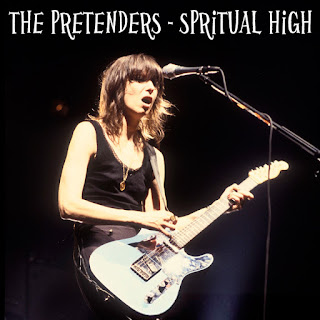 Here's the next in my series of stray tracks albums from the Pretenders. By this point, the Pretenders were really just Chrissie Hynde and a bunch of back-up musicians. In fact, the 1990 album "Packed!" only indicated Hynde as a member. So this also has some Hynde solo songs, and I treat the two things interchangeably.

Either Hynde was really in a mood to do covers during this period, or she wasn't being very prolific with her songwriting, because every single song is a cover version. Maybe it was some of both. She does some famous songs by the likes of the Beatles, Bob Dylan, and Jimi Hendrix, as well as some obscurities. "Spiritual High (State of Independence)," in which she was the guest lead vocalist for the band Moodswings, was a minor hit.

All songs here have been officially released, except for one. That one, a cover of the Doors' "Touch Me," apparently was intended for a Doors tribute album that never came to be. Somehow, the cover got released on bootleg, and its sound quality is just as good as all the other songs.

I've unfortunately had to include one songs as a bonus track, due to sound quality issues. That's a cover of "Positive Bleeding" by Urge Overkill. The Pretenders only played this a few times in concert, and all we have is an okay sounding audience bootleg recording.