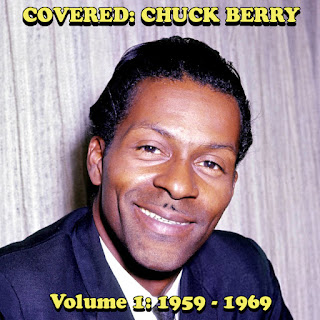 Here's the next in my "Covered" series, focusing on the most successful songwriters of all time. This time, I'm looking at Chuck Berry.

Berry's influence can't be overstated. Here's a couple of telling quotes. John Lennon once said, "If you had to give rock and roll another name, you might call it 'Chuck Berry.'" And Stevie Wonder said, "There's only one true king of rock and roll. His name is Chuck Berry."

Berry had a long successful career as a performer, scoring many hits on his own. But his role as a songwriter was arguably more important. Starting in 1955, the same year rock and roll broke big, he specialized in wordy, literate, and clever lyrics. He raised the bar for rock and roll songwriting,  and served a model as one of the few major stars of the time who wrote their own songs.

If you want to know more about Berry and his life, here's his Wikipedia entry:

Not a lot of other artists had big hits with Berry's songs, relatively speaking, probably because Berry almost always had his own hits with them. But it seems that any musician who ever got into rock and roll covered Berry's songs. So my challenge this time around wasn't to compile lots of hit versions (as I did some other artists in the "Covered" series) so much as it was to compile the best and most interesting versions out of hundreds and hundreds of covers by well known artists. I've found enough material to make three albums.

As usual with this "Covered" series, I've forced myself to only include one version of each song. However, I've made an exception this time by including two very different versions of "Johnny B. Goode," as you'll see with later albums.

I've also tried hard to limit each artist to only one song, to spread the musical wealth around. But, I made two exceptions, both on this album: the Beatles and the Yardbirds. For the Beatles, I considered it a must to include their version of "Rock and Roll Music," which they nailed. But I also included their version of "I Got to Find My Baby," since they're pretty much the only artist to ever cover that rare but good Berry song. With the Yardbirds, their version of "Too Much Monkey Business" is widely seen as a classic, and it's my favorite for that song. But I felt I couldn't miss "Jeff's Boogie" as well. This later instrumental is supposedly a Yardbirds original, but in fact it's a note for note copy of a song by Berry called "Guitar Boogie."So I've added "Guitar Boogie" to the song subtitle.

Speaking of stealing songwriting credits, the first song here, "Forty Days" by Ronnie Hawkins, needs some explanation. This very clearly is a version of Berry's song "Thirty Days," with only the title changed. So why 40 days instead of 30?! It seems that Hawkins thought he could claim the songwriting credit simply by changing the title. But that didn't work and he ended up having to pay royalties to Berry. I've put "Thirty Days" in as a subtitle to make clear what the song title really should have been.

But that's not the last songwriting credit controversy here. I've included the Beach Boys' "Surfin' U.S.A." That may seem strange to you unless you know that song is just Berry's "Sweet Little Sixteen" with new lyrics. At first, Brian Wilson of the Beach Boys tried to take full credit for writing the song, but a deal was made to give half the credit to Berry. Wilson later freely admitted that he just rewrote the Berry song.

I listened to a ton of Berry covers in putting these albums together. That enabled me to select some obscure covers, as well as choosing some obscure Berry songs. For this album in particular, some garage bands did some lively, punky versions that deserve more attention.

By the way, each of the three Berry albums I've put together are about 50 minutes long.