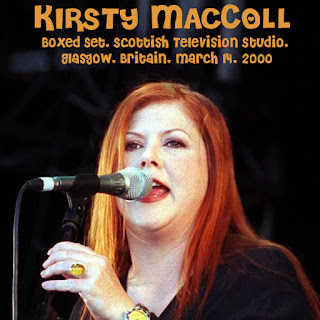 In my opinion, most musical artists have ten or less prime years towards the beginning of their career (but after they "make it"), and then have a long slow decline. But Kirsty MacColl was different. Her recorded career started quite good way back in 1979, and then slowly but steadily got better. I think this was because she was very serious about songwriting and was always improving her craft.

In my opinion, her best album is her last one, 2000's "Tropical Brainstorm." She'd spent the previous few years absorbing Latin American music in a deep way. She was primed to start an entire new and exciting phase of her career, only to die later in 2000 in a tragic boating accident.

This concert comes from 2000, right before "Tropical Brainstorm" was released. Most of the songs on it are from that album. It's the recording of an hour-long TV show called "Boxed Set" (not to be confused with a recorded box set). The music is about 45 minutes - I assume that's the hour minus commercials and such.

The best thing about this concert is the sound. The sound quality is excellent, as good as you'd expect from an official live album. There isn't much talking between songs, and the versions aren't that different from the studio album versions. But MacColl had been shy for most of her career, not performing concerts at all until the 1990s. It's nice to see that she totally nails these songs on stage. It also serves as a kind of greatest hits, with the best songs from "Tropical Brainstorm," plus a smattering of her best songs from earlier in her career.

I could have used a screenshot from the actual Boxed Set performance for the cover art, but that would be too low resolution for my tastes. Instead, this photo comes from the 2000 Fleadh music festival in London, in June 2000.
Posted by Paul at 12:54 AM