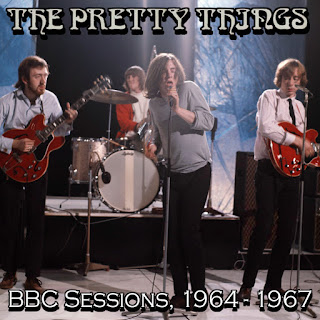 I've posted a bunch of stray tracks albums by the Pretty Things. In short, this band is way underappreciated, in part because so much of their best music didn't make it onto their albums. There's no live album or even concert bootleg from their 1960s prime. But luckily, they did leave behind a lot of BBC recordings. So here's the first of three albums of their BBC material from the 1960s and early 1970s.

There have been a few good official BBC collections released over the years. The most recent one is four discs long. So most of the songs here come from such official sources. That said, my version differs in two important respects. For one, if a song wasn't officially released at all and the best known version comes from a BBC performance, I put that on one of my stray tracks albums, and not here. I generally try to avoid duplication like that. Secondly, I've added some live versions of songs that weren't performed on the BBC. There aren't a lot of good live recordings of the band in the 1960s, but there are a few.

I've included five live songs on this album. I have to admit that the sound quality of all five is a notch below the BBC recordings. But they're still more than worthy of inclusion.  All five come from TV performances, so these are hardly dodgy audience recorded bootlegs.

By the way, fun fact: two songs here, "The Moon Is Rising" and "You Don't Love Me" come from a festival that was shown live on Dutch TV. The Pretty Things looked and behaved so outrageously that the TV station was deluged by people phoning in complaints, causing the station to cut away from the performance. By today's standards, it's hard to see what the problem was. But in 1964 and 1965, the Pretty Things looked and sounded more outrageous than virtually any other band, such as the Rolling Stones. For instance, look at the 1964 cover art and note how long lead singer Phil May's hair was, even compared to the Beatles' "mop tops" and the hair of other such bands.

I don't know why I included "Edit" in the title for the song "L.S.D." It's been a while since I edited these songs, so I don't remember. But since they're BBC recordings, I'm guessing I edited that song and some others in order to cut out the annoying BBC DJs talking over the starts and ends of songs.

The cover art dates from 1964. Obviously, the band must have been making a TV appearance, but I don't know which show they were on.
Posted by Paul at 5:53 PM