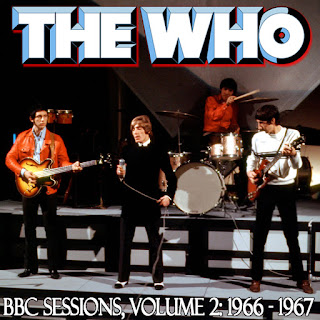 This is the second of four albums dealing with the Who's performances at the BBC.

Additionally, I renamed what had been "Volume 3" to "Volume 4" for obvious reasons.

There is an official album of this BBC material, called "BBC Sessions." But I think I've improved that in some ways, such as adding some songs that were missed or were done for other radio or TV shows, as well as removing the BBC DJ talk over some songs.

The main reason I found enough material to split an album in two is due to a blogger named Prof. Stoned. He's done a great job finding the best versions of albums by classic rock artists, often remixing them to get the most out of them. Here's his blog:

He had improved the Who's BBC sessions, so I wanted to redo my albums based on his work. While doing so, I realized he'd found some BBC recordings I'd missed. For instance, on this album, "So Sad about Us," "Summertime Blues," "Our Love Was," and "Relax" are all actual BBC studio performances is fine audio quality, so I'm not sure why they weren't on the official album.

Another ten songs here are BBC studio versions from the official album. I used the Prof. Stoned versions for all of those too.

Two other songs come from non-BBC bootleg sources. "Barbara Ann" was done for a French TV show. "Glittering Girl" is an odd one. This song was never done by the Who in concert, and only came out on an archival release decades later. But there's some footage from a German TV show of main songwriter Pete Townshend singing part of the song on acoustic guitar for the band's managers. Then there's another snippet of the full band practicing it in a rehearsal. I cleaned up these sections a bit, removing some talking over the music and cutting out some talking between sections. (That's why there's an "[Edit]" in the title. All together, the sections only amount to about two minutes of music. But still, I thought it's interesting enough to inclusion.

Four other songs have "[Edit]" in their titles too. That's due to the usual problem of BBC DJs talking over the music. As usual, I used the X-Minus audio editing program to wipe out the talking while keeping the underlying music.

The cover photo comes from the band playing on a Danish TV show called "Klar I Studiet" in October 1966 in Copenhagen, Denmark.

Email ThisBlogThis!Share to TwitterShare to FacebookShare to Pinterest
Labels: 1966, 1967, BBC, Pete Townshend, Who