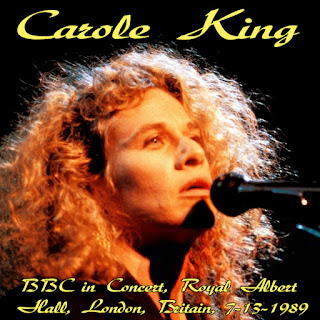 I keep finding so many BBC concerts that I'm posting a lot of them in a hurry just to keep up with the flood. I already posted one by Carole King that dates back to 1971. I wasn't that impressed with that one, since it's a short show and there are longer ones available from that time period. But I was pleasantly surprised by how good this one is. If you're a fan of her music, you should give it a listen.

King is one of the most successful songwriters of all time, having written or co-written over 100 hits. Hopefully, she's sitting on a mountain of money from all her hit songs. But all that success has meant that she didn't need to go on tour unless she really wanted to. Apparently, she's shy and usually didn't want to. Looking at the setlist.fm database, it seems she's only done two major tours since the 1970s, in 1989 and 2005. By the 1980s, her sales were way down from the millions and millions of albums she sold in the early 1970s. But this is a solid concert, both the new and old songs. She's surprisingly rocking at times, while performing solo on piano at other times.

This concert is unreleased. But it's up to the usual high BBC sound quality standards.

This album is 57 minutes long. I suspect it may have been edited down by the BBC to fit an hour length format.

The cover photo comes from a 1989 concert, but I don't know the details.