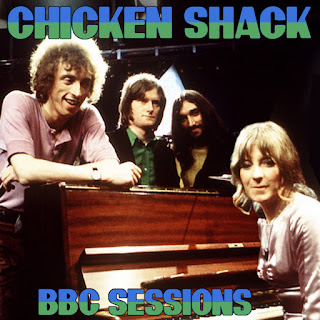 Here's something else I'm posting in tribute to Christine McVie, who died today (November 30, 2022) at the age of 79. She started her musical career as the keyboardist and one of two lead vocalists for the British blues band Chicken Shack. She didn't stay with the band long, only about a year, but she sang on their one big hit, "I'd Rather Go Blind." Then she put out a solo album before joining Fleetwood Mac. (At the time, she was known as Christine Perfect, but she changed her name after marrying Fleetwood Mac bassist John McVie in 1970.)

I believe I've already posted all the Chicken Shack BBC performances where the lead vocals were done by McVie, on various Fleetwood Mac BBC albums I made, as well as a McVie-focused album called "On My Way." But since I'm posting so many BBC albums, I figure Chicken Shack deserves one. So all those McVie sung songs are here too. But there are more songs sung by the band's lead guitarist Stan Webb.

In my opinion, Webb was a talented lead guitarist, but only an average singer. He should have replaced McVie with another female vocalist to keep things more interesting. Instead, when McVie left in mid-1969, he took over all the vocals. The band continues to this day, still led by Webb, but they never were as popular as they were when McVie was a member. She's on the first 14 songs here, singing lead on about half of them and playing keyboards on all of them. The last twenty minutes (tracks 17 to 21) are all sung by Webb after she left. I couldn't find any more BBC sessions after 1970. As I said, their popularity declined after McVie left.

Everything here is officially unreleased. There is an album of the band's BBC recordings out there called "On Air," but it seems to be one of those many grey market releases, taking advantage of European copyright law. Everything does come from BBC studio sessions. A few of the songs have "[Edit]" in their names, due to the usual problem of BBC DJs talking over the music. As I usually do, I used the X-Minus audio editing program to wipe out that talking.

This album is an hour and five minutes long. If I had a few more songs, I would have had enough for two volumes. Instead, it's just one long one.

The cover photo dates to 1968. McVie, sitting at the piano, used to be further to the right. But I used Photoshop to slide her closer to the others to better fit the square space.