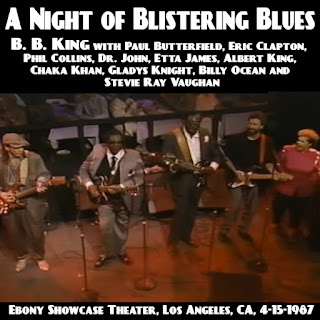 Hopefully, if you're a fan of the blues, you'll take a look at the list of artists mentioned on the cover art, say, "Wow!" and download this immediately. This concert mainly features B. B. King, who does all the talking, but his special guests are: Paul Butterfield, Eric Clapton, Phil Collins, Dr. John, Etta James, Albert King, Chaka Khan, Gladys Knight, Billy Ocean, and Stevie Ray Vaughan.

Why did all of these big names of soul and blues get together for this concert? I don't know if there was some special occasion or anniversary, but this show was filmed for a TV special shown on Cinemax, alternately called "A Night of Blistering Blues" or "A Blues Night." I've gone with the former name because it's more interesting.

Generally speaking, King did the lion's share of lead vocals. But he shared vocals with Albert King, Etta James, Billy Ocean, Gladys Knight, and Chaka Khan. I believe Phil Collins played drums on all the songs, along with another drummer. Paul Butterfield did all the harmonica playing. Eric Clapton and Stevie Ray Vaughan played lead guitar, and on more songs than just the ones they're credited on below. B. B. King and Albert King played lots of lead guitar as well.

This really was a once in a lifetime gathering of musical greats, and they rose to the occasion. I don't know why this has never been officially released as an album. The only flaw is that the last song was a blues jam with all the lead guitarists: B. B. King, Albert King, Eric Clapton, and Stevie Ray Vaughan. But unfortunately, it fades out after only a minute of guitar soloing from B. B. King. If you watch the video of this on YouTube, you'll see the credits are rolling and the recording ends when the show finishes.

This album is 56 minutes long.

I haven't seen any good photos from this concert. So I took a screenshot from the YouTube video. The quality is rather low-res, but this is all there is. From right to left, you can see: Stevie Ray Vaughan, B. B. King, Albert King, Eric Clapton, and Etta James.