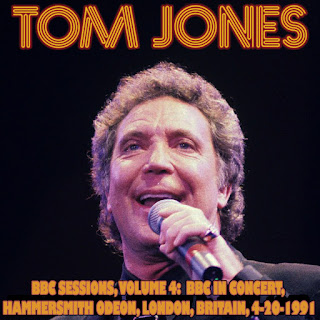 I'd posted three albums of Tom Jones BBC Sessions, all from the 1960s. I posted even more albums of his duet-heavy TV show "This Is Tom Jones." I thought I was all done with him. I'm not even that big of a Tom Jones fan, to be honest. But I recently stumbled across this concert from much later. Since it fits my BBC project, I gave it a listen and decided it's pretty good. So here you go.

Towards the late 1980s, it seemed as if Tom Jones was washed up, other than as an oldies act. But then he had a big hit in 1987 with "A Boy from Nowhere" then another hit 1988 with a cover of Prince's "Kiss." His career was revitalized and he would continue to have hits into the 2000s. This concert came after the release of his 1991 album "Carrying a Torch." That album didn't have any big hits or get great reviews. But some songs on it were produced by Van Morrison, including the title song and "I'm Not Feeling It Anymore," both of them featured here. So it brought him back to his soul roots. I think that makes it an especially good time for a concert recording (although a couple of songs from his latest album are duds, in my opinion).

As usual, the BBC sound quality is excellent. One nice thing is that he did a few rocking songs that he never released on album. "Good Times" was a hit by the Easybeats back in the 1960s. "Texas Twister" was a hit by Little Feat just the year before.

This concert is an hour and 43 minutes long.

The cover photo of Jones is from Wembley Arena in London in May 1991.