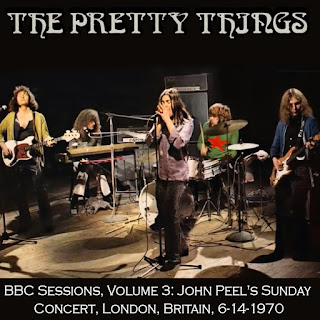 I recently noticed that although I've posted three volumes of the Pretty Things at the BBC, I never posted any concerts from them. There's very little live music from their late 1960s/early 1970s heyday that has been recorded with good sound quality. But there is a BBC from 1970. I hadn't posted it previously because it's rather short, at only 27 minutes. I'm guessing the band was given half of an hour long show, which was common in those days. However, I've decided to post it anyway. Since it is short, I've added three songs to give it a more decent length.

The main show featured here was hosted by BBC DJ John Peel. I'm sure there's an introduction that's missing, since he always had one at the start of his shows. But other than that, it's complete. It also has excellent sound quality, helped by the fact that it's been officially released as part of the album "At the BBC."

Just about the only other excellent sounding concert recording from this time is from the Paradiso in Amsterdam in 1969. Unfortunately, it only features a few full songs. I've already included three of those on "Volume 2" of my BBC series, since they were never otherwise done for the BBC at the time. That left two other full songs, neither of which were played for the John Peel concert in 1970. So I've put those two at the start. However, I noticed the lead vocals were rather low in the mix, so I boosted those using the X-Minus audio editing program. That's why they have "[Edit]" in their titles.

The other song I've added is the last one, "Cries from the Midnight Circus." It was done live for the Beat Club TV show in Germany. (You can find a video of it on YouTube.) I put it at the end because it took place after the John Peel show. I added some applause at the end since to help it fit in with the other songs, since it was played without any audience there. I also added applause to the two Amsterdam songs at the start. Those were done in front an audience, but the recording barely captured any of the clapping.

This album is 41 minutes long, including the three extra songs.

I'm not sure when or where the cover photo comes from. But based on the hair styles and clothes, it looks to be around 1970.