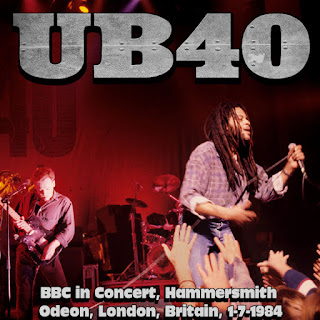 To be honest, I'm only interested in the first few years of UB40's long career. They started out with a lot of promise, writing good songs with a political edge, but eventually turned into a bland, adult contemporary reggae-lite band that I don't have much interest in. In retrospect, the turning point probably was their 1983 album "Labour of Love." It consisted entirely of covers, and was a huge hit. I really like that album, but I think it showed them that they could have much more success doing covers than doing their own material.

Anyway, it turns out that UB40 did three BBC concerts in 1983 and 1984. That's probably too much. I've already posted one from early 1983, before they did any of their "Labour of Love" songs. This one is from the start of 1984, and consists mostly of "Labour of Love" songs, so I figure both concerts are worthwhile. For the BBC show in between, they are three nice songs that aren't played on the 1984 one. So I've added those as quasi-bonus tracks at the beginning.

This concert was included on a deluxe edition of the "Labour of Love" album, so the sound quality is great. The three tracks from a different show are unreleased.

This album is an hour and six minutes long. The concert without the three extra songs at the start is 55 minutes long.