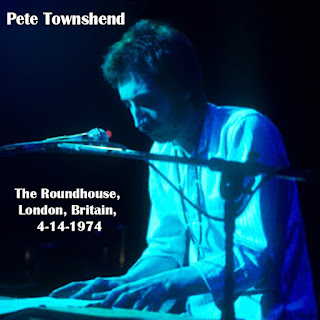 If you're a Pete Townshend and/or Who fan, this is a must have album. I've never shared it before because the sound quality was a little under par. But yesterday (as I write this in November 2022), musical associate Lil Panda posted an improved version. He used audio editing programs like Spleeter or X-Minus that have emerged in recent years to improve the mix. Most importantly, he boosted the lead vocals. This is basically his version, though I trimmed the dead air between songs a bit. This still is based on an audience bootleg and the sound quality isn't stellar, but now it's good enough to be very listenable.

What makes this special is that it's a unique concert in Pete Townshend's musical history. For all of the 1960s and 1970s, he was fully dedicated to the Who. He didn't play any solo concerts until 1979, and precious few for many years after that. The first good recording of any such concert comes from 1985. Yet he did this one concert in 1974 for a local charity, playing many songs that he's never played before or since.

Here's a blurb about it written by rock critic Dave Marsh in his book "Before I Get Old - The
Story of The Who":

"On April 14, 1974 (Easter Sunday), Townshend played a solo gig-the first of his career, for the Camden Square Community Play Centre ... Meant to be a quiet afternoon's entertainment, the solo show was blown out of all proportion when the press got word of it. Townshend spent a panicky week's preparation, then came out and did a fairly casual show using electric and acoustic guitars, piano, some synthesizer tapes and the original "My Generation" demo as he ran through a set that also included 'The Seeker', Jimmy Reed's 'Big Boss Man', 'Substitute,' and 'Pinball Wizard'. Despite a drunken heckler, the show was well-received and Pete was surprisingly confident."

The concert featured just Townshend, on either piano, electric guitar, or acoustic guitar. But he used some tape loops for drumbeats on a few songs. He also played some recordings, for instance demo versions of "My Generation." The most unusual feature of the concert are the many cover songs that he rarely played in concert again, if ever: "Big Boss Man," "Amoreuse," "If I Were a Carpenter,"  "Going to New York," "Girl from the North Country," "Corrina, Corrina," and "No Face, No Name, No Number."

This album is an hour and 14 minutes long.

For the cover, I was able to find a photo from the actual concert featured here. The picture quality wasn't that great, but I was able to improve it some using Photoshop.