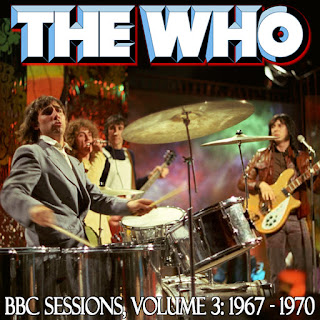 Note that I first posted this in 2018 as "Volume 2." But on November 28, 2022, I split the album into two parts, due to finding more material. So some of what had been here before has been moved to a new "Volume 2", and some new stuff has been added to what I now call "Volume 3." Additionally, I renamed "Volume 3" to "Volume 4."

The Who performed for many TV shows during the 1960s. Unfortunately, most of those performances were lip-synced, or the video footage was lost, or only exists in poor quality. One exception is the first three songs here. They come from the German TV show "Beat Club," but they actually were recorded during a concert in the Marquee Club in London instead of in Germany, as was the usual case for that show. These songs are unreleased, but you can see the video footage of them on YouTube.

Everything else here but the last song comes from BBC studio sessions. Most of these are from the official album "BBC Sessions." But three songs are not: "I Can't Reach You," "Pinball Wizard [1970 Version]," and "The Seeker (Second Version)." For both "Pinball Wizard" and "The Seeker," I've included two versions on this album because they played the songs twice for the BBC. It's understandable that the official album only had one of each. But I think they chose badly in the case of "The Seeker," because both versions have excellent sound quality, but the other version only has new vocals on top of the studio version, while the second version was completely new.

Note also that "Substitute" is listed as a second version because that song was also done for the BBC in 1966. I put that version on "Volume 2." Additionally, note that "I Can See for Miles" is mostly the same as the studio version, but new vocals and bass were used instead.

One strange thing about this album is that about half of it comes from 1967 and the other half from 1970, with nothing from 1968 or 1969. That's because the band didn't perform at the BBC for those two years, and only did lip sync performances if they appeared anywhere else. 1968 was a low-profile year for the band, with only a couple of singles released. And they had a very popular album with "Tommy" in 1969, but apparently they didn't promote it much or TV or the radio until after 1970 began. Two of the 1970 songs here are from "Tommy."

As I mentioned above, the last song, "Naked Eye," was not done for the BBC. This unreleased version comes from a Lulu-hosted TV show, of all things. Unfortunately, it fades out before the end of the song, but the vast majority of the song got recorded. Also, the version of "Naked Eye" here IS lip-synced. But they taped a unique version of the song just for the show, and lip-synced to that. So I'm including it here because it's a different version than the officially released one.

As an aside, I put this same version of "Shakin' All Over - Spoonful" on my "Who's for Tennis" compilation.  I also did that with "See My Way" from "Volume 2."

I believe the cover photo comes from a 1969 performance on a TV show called "Sounds of the Sixties." I didn't include any audio from that because they lip synced to their studio versions. By the way, I find it interesting that the photo puts drummer Keith Moon in the foreground. The Who is just about the only major band I can think of where the drummer tended to steal the spotlight.

Email ThisBlogThis!Share to TwitterShare to FacebookShare to Pinterest
Labels: 1967, 1970, BBC, Pete Townshend, Who