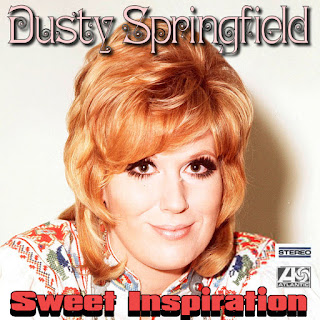 This is the last of my Dusty Springfield stray tracks albums.

I'm a really big fan of her music in the 1960s through the early 1970s. But in the mid-1970s, she moved to the US and lived several years with a very low profile. She apparently was depressed and used a lot of drugs. Her music career slowly petered out due to poor sales and her own distractions. She put out albums in 1972 and 1973, but she also had albums she finished in 1971 and 1974 ("Faithful" and "Longing" respectively) that didn't get released. (Both came out much later.)

In 1976, Elton John wanted to sing a duet with her, "Don't Go Breaking My Heart." But she wasn't up for it due to her problems, so Kiki Dee sang it instead. It went to number one in the US and Britain and pretty much everywhere else. However, in 1978 she started to come back with a new album. She regularly released music in the 1980s and 1990s, until her early death of cancer in 1999. She even had a few big hits, mostly with the help of the Pet Shop Boys.

Unfortunately, I don't like much of her later music. In my opinion, many great musicians of the 1960s and 1970s lost the plot due to disco in the late 1970s, followed by the bad production techniques of the 1980s. I think Springfield is a classic example. She might have still sung well, but I usually can't get past the production issues.

So this album is kind of a last hurrah for me. I recommend you get her four early 1970s albums ("Faithful," "See All Her Faces," "Cameo," and "Longing"). This is meant to scoop up whatever didn't get released on those.

The vast majority of the songs here are outtakes from various album sessions that didn't get released until much later. The only still-unreleased song is her theme to "The Six Million Dollar Man." Apparently, this was used for two made-for-TV movies that served as warm-ups for the hit TV show.

"Corner of the Sky" is also an interesting case. Springfield wanted to record this for her 1974 album "Longing." But she only did some of the vocals before giving up. Petula Clark came along many years later and sang the missing parts, turning it into a duet.

By the way, I hate to keep doing this, but in the course of making sure I had everything that fit for this album, I came across a whole new bunch of songs she did on TV, which I've put on my "On TV and Radio" album series. I found no less than nine more songs. So I've updated a bunch of those albums.

The 1968 album has two new songs: "This Could Be the Start of Something Big" and "Cielito Lindo."

Sorry that I keep updating these files! But this time I was very thorough and went through a book "The Complete Dusty Springfield," that lists all the songs she did. So the only way I think I'll update these again is if performances that weren't publicly available somehow become available. (And there aren't many of those by this point.)

For the cover art, I found a nice photo from late 1970. I also added in the record company logo, since her albums from that time period did that.
Posted by Paul at 2:21 PM