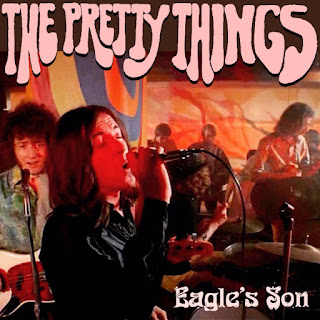 Okay, I think it's time for some more Pretty Things. And that means telling another strange but true story.

In 1968, things improved somewhat for the band, due to their album released that year, "S. F. Sorrow." It was considered the very first rock concept album, beating out "Tommy" by the Who by a year. (The Small Faces put out "Ogden's Nut Gone Flake" earlier in 1968, but only half of that fit a concept.) "S. F. Sorrow" is a great five-star album, no question, and in my opinion it was the highlight of the band's career. I'm not posting it at this blog because there's nothing to change, and you should buy it.

But unfortunately, even though the album was critically praised and it gave the band a lot of hip credibility, sales still weren't very good. In fact, the album didn't even reach the top 100 in either the US or Britain. So the band continued with their yearly Electric Banana albums. The first five songs on this album come from the third such album, called "Even More Electric Banana." Fans of the genre generally agree it's the best of the lot. (There were two more, in 1973 and 1978, that are pretty much forgettable.)

That's not the story I want to tell you here though, because the Pretty Things had another side project that was at least as strange. Even though the band was just barely popular enough to stay together, it turns out they had a super fan in the form of a rich French man named Philippe DeBarge. He was a young playboy, and he wanted to be a rock star. So he offered the Pretty Things a lot of money if they would write and perform a bunch of songs so he could make an album. All he would do is sing the lead vocals.

Such a vanity project sounds like a disaster waiting to happen, right? But a couple of interesting things happened. For one, the Pretty Things were firing on all cylinders at this time and seemingly were unable to create bad or even mediocre songs. So most of their songs for this project were just as good as the songs they were doing for themselves. But then, even more improbably, DeBarge turned out to actually be a good singer, and with no trace of any French accent. In fact, he was such a Pretty Things super fan that he modeled his vocal stylings on Pretty Things' lead singer Phil May to the point that it's almost impossible to tell that it's some random French dude singing these songs instead of the Pretty Things doing their usual.

But while DeBarge and the Pretty Things made a surprisingly good album together, the outside world never knew. DeBarge shopped the album around to many record companies, but no company was willing to release it, and apparently that was the end of DeBarge's musical career. So it sat on a shelf collecting dust all the way until 2009, when more recent Pretty Things super fans found out about it and worked with the band to finally get it released.

I've included six of the 12 songs from that album. Three of the other songs were also used on "Even More Electric Banana," another was done by the Pretty Things on the BBC, and another one ("Graves of Grey") evolved into another song they used elsewhere. That only leaves one I didn't include simply because I didn't like it.

There are four more songs here that are actually performed by the Pretty Things using the Pretty Things name (gasp!). Two of them are originals that were were played on the radio for the BBC but only released on a BBC compilation decades later. Another one, "Marilyn," was also only played for the BBC at the time, but it STILL hasn't been officially released, despite the fact that the band has put out two BBC compilations in recent years and the second one is 4 CDs in size. And it's a good original song that was recorded well! I don't understand why it was neglected then, or why it still is until today.

Finally, I've included an instrumental version of the Byrds' song "Why." This is a bit strange in that the Pretty Things played a 15 minute long version of this song at a particular concert, but only the last six minutes of it were bootlegged, and bootlegged in pristine soundboard quality, no less. By that point in the song, the band had gone off with psychedelic jamming to such a degree that it's basically unrecognizable as that particular Byrds song. But it's a really good instrumental jam, so I've included those six minutes anyway.

Let's sum up what we have on this album, all from 1969. The five Electric Banana songs weren't publicly available at the time, since their albums under that alias were only meant for industry insiders, in order to be considered as music for movies. Even if some ordinary person did stumble across a copy, there was no way they could have known Electric Banana in fact was the Pretty Things, since that was kept a secret. Then there were the three songs done for the BBC and not released at the time. Plus there's a cover of a Byrds song that also has been unreleased in any form until today. Finally, there are six songs done with Philippe DeBarge that weren't released until decades later.

So, add it up, and the Pretty Things released a really good 1969 album that absolutely nobody was able to hear or buy! And that's a shame, because they put out a great album in 1968 ("S. F. Sorrow") and they would put out another great one in 1970 ("Parachute"), but in the late 1960s rock world, it was common to release an album a year, sometimes more.

The Pretty Things didn't even release a single of new material for all of 1969, much less an album, so they dropped out of sight. Yet in fact they had lots of great songs. For instance, consider the song "Alexander" from "Even More Electric Banana." The band liked it enough to play it at the BBC that year, and they also played it in concert. They still played it in concert decades later. Yet, for decades, there was no way an ordinary fan could buy a copy of that song in any form, under any band name.

I think the band sabotaged themselves, repeatedly. If you haven't heard much of the Pretty Things, there are good reasons for that. Bands are largely judged by their recordings, be it studio or live, but the band squandered many really good songs on bizarre side projects. It was almost like they were trying to fail.

Here's a quote about the band by the band's long-time manager Mark St. John from a 2018 article in the Guardian that reinforces that idea: "They have a completely enveloping understanding of mayhem, with zero attention to detail, really undisciplined.They are the most unprofessional f**king band.”

But time can change perspective. Decades later, we can finally hear the 1969 album that should have been another high point in the history of the band.

Incredibly, the band would go on to not release an album in 1971 when they had a bunch of excellent songs for that year too. I'll get to that the next time I post something from them.

This album cover needs a bit of explanation. In 1969, the Pretty Things appeared in a flop comedy movie called "What's Good for the Goose." But, as usual, the band screwed up what little career boost they could have had because they appeared in their Electric Banana guise, a band name most people in the audience would never hear of before or after. And there was no way to buy copies of the two songs they played. Ugh! Anyway, the cover is taken from a screenshot of their movie appearance, where they are the house band at a "groovy" private party. I got the unique lettering from one of their singles covers, but I forget which one.
Posted by Paul at 6:30 AM