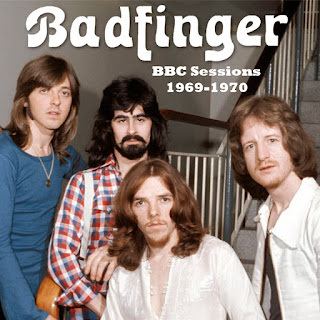 I've been a Badfinger fan for a long time, but I must admit that it's only recently since I got into them on a deeper level. I had assumed that their official studio albums contained all their best stuff. But that's not true: they have a wealth of interesting outtakes, demos, and live performances.

So once I realized this, one thing I wanted to investigate is what sort of BBC performances they'd done. There's an official album that's quite good called "BBC in Concert 1972-3," But it's Badfinger playing two concerts which got played over the BBC. That's not the same thing as a band like them playing songs in the BBC studios with no audience to muddy the sound. Only one song from the official album, "Come and Get It" was actually recorded at the BBC. It's likely that was tacked onto the album for fear that it didn't have enough of their big hits on it otherwise.

I dug deeper and found out that Badfinger did play live at the BBC a bunch of times, starting in early 1969 when they were still known as the Iveys. (They changed the band name to "Badfinger" at the end of 1969. But to reduce confusion I'm just calling them Badfinger for everything they did.) Many of their BBC performances have been bootlegged, and they did a lot of really interesting cover versions. But unfortunately, the sound quality is really poor for most songs, too poor for me to want to have them in my collection.

I kept digging though, through lots of bootleg sources, and eventually I was able to find an album's worth of BBC performances that actually sound good. This album is the result. In 1969, Badfinger were a bunch of nobodies. They'd released a single that failed to make the charts, and then in 1969 they put out an album that also failed to make the charts and apparently was next to impossible to even find in the stores. So when they played concerts they had to rely heavily on covers to keep audiences happy, and that's reflected in the songs they played for the BBC that year.

The Badfinger of 1969 is probably not what you'd expect, based on their later records. They were rocking and even soulful at times. Here are some of the BBC performances I couldn't find in good quality that can give you an idea of the kind of music they were playing at the time: "River Deep, Mountain High," "Birthday," "Revolution," "Drive My Car," "Needle in a Haystack," "Summer in the City," and "Proud Mary." (You can find of all of those and more on bootlegs if you don't mind the muddy and distant sound quality.)

However, I was able to find some cover songs of that type: "Respect" (Aretha Franklin), "Don't Let Me Be Misunderstood" (The Animals), "Just One Look" (Doris Troy), "The Way You Do the Things You Do" (The Temptations), "You Can All Join In" (Traffic), and "Up on Cripple Creek"  (The Band).

Furthermore, I found one obscure cover they did I really liked, "Surrender Your Love," originally done by the British girl group the Carrolls in 1966. But the sound quality is subpar, so I've only included it as a bonus track.

While doing all those covers, they also tried to include their own songs, playing more as they grew in popularity. There are eight of those (although one, "Come and Get It," was written for them by Paul McCartney). I'm pretty sure the song "Someday" is a Badfinger original that has never been officially released in any form. But if someone is a huge fan of the group and can confirm or deny that, please let me know.

In a couple of cases, I had to edit out the annoying BBC DJs talking over the beginnings or ends of songs. But luckily, there weren't many cases like that.

I was pretty selective about the sound quality for these songs, so you don't need to be a Badfinger fanatic to want to listen to this. These don't all sound pristine, but they're of the same level as official BBC releases by other 1960s bands.

For the cover art, I was able to find a photo of Badfinger at the BBC studios (specifically their TV studio) in early 1972. That's not ideal, since it's later than any of the performances here, but they were the same four guys then as they were in all their 1970 performances on this album.
Posted by Paul at 12:37 AM