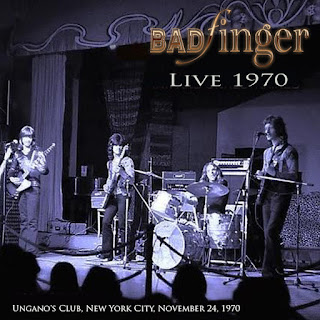 I'm in such a Badfinger mood that I'm posting two albums from them in a row.

I had long been under the impression that there is no good Badfinger live music to listen to other than the two short concerts documented on the official album "BBC In Concert 1972-3." There's another official live album called "Day After Day," but it's a sonic abomination. Starting with a poorly recorded concert from 1974, one of the surviving band members tinkered with it until it was basically unlistenable, especially by dubbing in thumping loud drums, 1980s style, that had no business being there. Avoid that album at all costs.

Unfortunately, there aren't many Badfinger concert bootlegs to begin with, and nearly all of them are audience recordings of middling to poor sound quality. However, I've found one startling exception, and that's this concert. It's a quality soundboard with very little audience noise.

There's an interesting story behind this particular show. In November 1970 when it took place, Badfinger had had a number one hit with "Come and Get It." But that had been written by Beatle Paul McCartney, and it wasn't yet clear if the band would be a one-hit wonder or if they had talent to be a significant band on just their own merits. Their great album "No Dice" had only been released earlier in the month, but it hadn't made much of an impact yet, as the first single from it, "No Matter What," was only starting to climb the charts. (It would reach the top ten in Britain and the US in January 1971.)

As a result, Beatle George Harrison decided to take it upon himself to help promote them a little bit. (Keep in mind they were signed to the Beatles' record label Apple Records.) He showed up at this concert (with his wife Patti Boyd) and sat at a table in the front of the small club. Then, to start the show, he got up on stage and introduced the band with a few kind words. After that, he returned to his prominently located seat. According to a reporter who was there, "For a while, most people watched George Harrison watch Badfinger, then everyone noticed how good Badfinger were, good enough to draw attention away from a former Beatle."

So that's a fun tidbit. Unfortunately, Harrison's introduction isn't recorded here. Badfinger played two sets that night, with nearly identical set lists. Presumably, he did that before the first set. But this concert is of the second set, and the recording of the first set is said to be lost.

The setlist mostly consists of originals. But there are some notable cover versions too: "My Dark Hour" (a Steve Miller Band song that Steve Miller co-wrote with Paul McCartney), "Feelin' Alright" (by Traffic), and a medley of "Love Me Do" (a Badfinger original, not the Beatles song) with three Little Richard songs - "Lucille," "Rip It Up," and "Long Tall Sally." There also was a version of Chuck Berry's "Roll Over Beethoven" to end the show, but I haven't included it since the recording of it abruptly got cut off after only one minute.

Additionally, I've added two bonus tracks of sorts, because they're songs from other concerts. "Johnny B. Goode" comes for a soundboard of a concert at the same club, but one night later. (As far as I know, that concert hasn't been made public other than this one song, but the set lists are otherwise identical anyway.)

"Walk That Road" is a more interesting case. That song also comes from a soundboard recording just four days later. This concert also hasn't been made public, even as a bootleg, aside from this one song. In 2016, it was announced that an official album of this show would be released soon. It was called "Raw and Unrestrained," and was going to be released that June. But time has passed and the album hasn't been released yet, so it probably isn't happening. As far as I can tell, "Walk That Road" is a Badfinger original that hasn't been officially released in any form. It might even have only been played in concert a few times, or just the one time. (Some of the lyrics to the Carl Perkins song "Matchbox" are included towards the end of the song.)

By the way, the set list of that show from four days later (at the Palladium in Birmingham, Michigan) is almost identical to this one. In addition to "Walk That Road," the band also did "Crimson Ship" and "Rock of All Ages" that night, but they didn't play "Johnny B. Goode" or "Roll Over Beethoven."

If you're wondering "Why should I listen to Badfinger live?" then "Walk That Road" is a good example of why. This is not the Badfinger you usually hear on their studio albums. What really strikes me is what a talented lead guitarist Pete Ham is. And that shows up on other songs too. For instance, "Feelin' Alright" is turned into a eight-minute long guitar solo showcase. The band is able to bring their excellent vocal harmonies to the concert, but they also play their instruments with talent and energy.

For the album cover, I was able to find a couple of photos of the band playing at the actual concert. But they all are in black in white. I also was able to find the exact photo of the official album that was going to be released on a concert just four days later. I decided to use that instead. However, I made some changes to it. Obviously, I had to change the text, due to it being about a different concert. Also, I found the exact font text and color for the "Badfinger" name, and pasted in a much bigger version, since I thought it looks better that way.
Posted by Paul at 2:19 AM