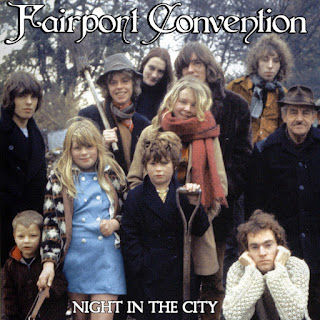 I've fallen behind where I want to be with posting Fairport Convention material. (I really should have posted all I have on their late 1960s and early 1970s stuff before posting Richard Thompson solo stuff.) I'm going to try to catch up in a hurry.

This is a stray tracks collection, avoiding all the songs on their official albums. But it's also almost a BBC compilation, because 8 of the 12 songs here come from BBC performances. The band had a very wide ranging repertoire. Thank goodness we have their BBC recordings, because in my opinion these songs sound just as good as many of the songs on their albums. The chief difference is their 1960s had a fair amount of originals, and these are mostly cover versions. There are a few originals here, however: "Throwaway Street Puzzle," "Now and Then," and " If It Feels Good, You Know It Can't Be Wrong."

But what covers they are! This is my favorite Fairport era, their first couple years when they looked to American folk rock as their main influence before getting deeply into British traditional folk.I like that era too, but I like this a bit more.

All the songs here are from the second half of 1968, meaning Sandy Denny was already in the band, and she sings most of the songs.

I've put one song as a bonus track, a cover version of Bob Dylan's "It Takes a Lot to Laugh, It Takes a Train to Cry." It's the only song here from a concert, and the song is much worse than for all the others. It's also the only song that's officially unreleased.

It Takes a Lot to Laugh, It Takes a Train to Cry (Fairport Convention)

There are very few good color photos of Fairport Convention in 1968. This one definitely comes from 1968. But there are some other people in the photo in addition to the five members of the band at the time. According to the caption, it was taken in a public park, and the women in the middle of the back is Anthea Joseph, who was a pivotal early supporter of British folk-rock.
Posted by Paul at 10:11 PM