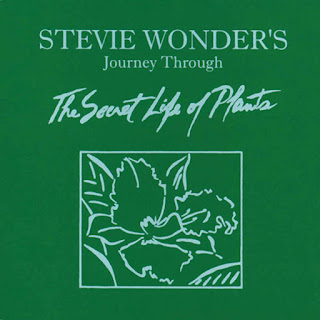 I'm in a Stevie Wonder mood today, so here's another one from him.

From 1972 to 1976, Wonder was on top of the music world. He released one all-time classic album after another, culminating in his 1976 magnum opus, "Songs in the Key of Life." It seemed he was on a roll and could keep going like that indefinitely.

But then... nothing. He didn't tour after "Songs in the Key of Life," and didn't put out any new music either. It wasn't until 1979 when he reemerged, with a very offbeat project. There was a nature documentary called "The Secret Life of Plants" that virtually nobody saw, and Wonder released a double album soundtrack to it. The vast majority of the songs for it were instrumentals, which makes sense for music to a nature documentary.

The anticipation for Wonder's next release was immense. When his "Journey through the Secret Life of Plants" came out, it was a big disappointment, both critically and commercially. Clearly, Wonder was tired of the expectations of always coming out with more great hit singles and albums, and just wanted to follow his muse in experimental directions.

I applaud him for his boldness in bucking expectations and in his musical vision. But I'm afraid to say that "Journey" just isn't that good of an album. It has its moments, but at 88 minutes long, it's way too long. A lot of it seems like padding, with songs extended to fill time, and some of the same musical motifs repeated over and over again. Plus, although it is experimental, a lot of it sounds like "easy listening" or "new age" background music.

I don't want to go into detail about why I chose to cut certain songs and keep others, because that would take too long. But I will say that I kept all the songs with his vocals on them, plus the instrumentals I liked best. The result is that only five out of 13 songs here are instrumentals, whereas on the double album version, 12 out of 20 songs are instrumentals, or at least are songs lacking in understandable vocals.

In addition to leaving out a bunch of songs, I also edited some songs down. I've marked in the song titles which of the seven songs I significantly edited down. The most drastic example is the kind of instrumental "Race Babbling," which goes on for over eight minutes on the original album. I've cut it down to just two minutes. (I like a little bit of the song a lot, but it's extremely repetitive overall, with only minor changes for eight minutes. Sometimes, less is more.)

Some songs, like "Power Flower" and "Outside My Window," are very good, but go on too long. So I cut short things like choruses that repeat over and over at the end of a song. In other cases, I cut out whole sections of a song. For instance, "The First Garden" is a nice instrumental, but the original version ends with a couple minutes that is pretty much just the atmospheric sounds of a jungle. I chopped that whole section out. For "A Seed's a Star - Tree Medley," I cut out about a minute from the middle of the song, where Wonder uses some kind of manipulation of his voice to make it sound robotic (similar to what Neil Young would do with his "Trans" album a couple of years later).

Anyway, some people love the entire double album version, and would find any shorter version to be a sacrilege. If you're one of those people, great. This album is not for you. But over the years, I've seen many comments that the album goes on too long and that it would have made a much better single album. I've even read some newspaper reviews to that effect. If you feel that way, then please give this version a try.

Even after all the edits and cuts I made, I still don't think it's a great album, like those he did from 1972 to 1976. But it's a much better one than before, IMHO, and one I like to listen to from time to time.

What would have made it much stronger was if he would have used at least some of the countless great unreleased songs he had lying around. For instance, I've read he almost included the song "Overjoyed" on it, but that got cut at the last minute. That alone would have really helped the album, and would have been a big hit single at the time. But I feel it goes beyond my task here to add extra songs, especially since there isn't any available version of "Overjoyed" from around 1979. (It was officially released in 1985, and played in concert from 1983 onwards.)

By the way, I've got a lot more Stevie Wonder to come after this. His career in the 1980s and after has been a disappointment compared to what came before. I'm going to do my best to try to "fix" that, using lots of music he didn't put on his official albums.

I've noticed the official album cover comes in several different colors, with the same design otherwise. (I'm not sure how many, or why.) I've picked the green version, since it seems to be less common.
Posted by Paul at 6:34 PM