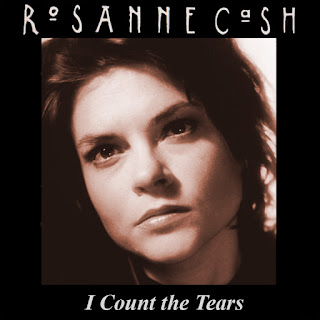 I continue to maintain that Rosanne Cash is awesome, and very underappreciated. She was the big star she deserved to be all through the 1980s, only to see her popularity plummet due to her no longer fitting the strict limits of country music radio stations. This comes not long after the start of her "post-country" phase of her career, though there's still some country influence on some songs.

Out of the first nine songs, the vast majority are covers. I particularly enjoy her version of "I Count the Tears," which is why I made it the album title. All but one of those nine songs are officially released, usually from various artists compilations, though two of them come from one of her great hits albums.

The remaining six songs are a bit different. In 1996, Cash released the album "10 Song Demo." It was 11 (not 10!) songs done with just her guitar and an acoustic guitar. Normally, I'd be all over that like white on rice. If you've been following this blog at all, you've probably noticed that I love "unplugged"-type recordings. But in this case, something seems a bit off to me. Perhaps her performances lack a little passion or energy. Whatever it is, I prefer some of her songs when she performed them for various in-person radio station appearances, even though they're done in the exact same way, just her voice and an acoustic guitar.

So five of the last six songs are versions of her "10 Song Demo" songs. One song in there, "Crescent City," is from one of those radio station appearances, but it's a cover of a Lucinda Williams tune.

If you don't want the duplication of the songs from her 1996 album, remove those and you still have a solid 33 minute long album.

For the album cover, I wanted a photo of Cash that showed off what a beautiful woman she is. But I couldn't find any really good photos that looked like they were from the early 1990s. So I decided to use the photo on the cover of her "Essential Rosanne Cash" album, since it was exactly the sort of photo I was looking for. For the framing and the text, I used the artwork from one of her 1993 singles.
Posted by Paul at 2:24 PM