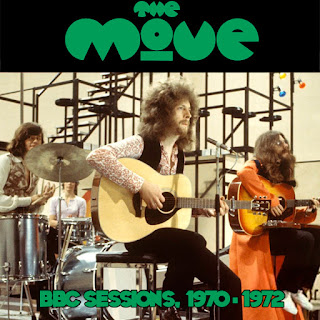 Here's the last of the albums I plan to post from the Move. It's the end of a series of four albums covering their performances at the BBC.

Unfortunately, their BBC albums end on kind of a down note in that the Move petered out as a band, releasing a few singles before turning into the Electric Light Orchestra (ELO), and in a similar way, the Move made fewer and fewer appearances, either at the BBC or in concert in general, as the band wound down. They also got a LOT less diverse with their song list. The previous BBC albums all had lots of interesting cover versions, but this only has one, their version of the Beatles song "She's a Woman."

But on the flip side, Jeff Lynne joined the band in late 1969, and his arrival greatly strengthened the band's songwriting. So, song for song, this is a strong album. But unfortunately, some great songs late in the band's career don't appear to have been done at the BBC or live at all, or at least were never recorded. For instance, "California Man," "Chinatown," "Tonight," and "Do Ya." In the case, of "Do Ya," I had a nice alternate studio version of that song that I didn't have a good spot for, so I stuck that on here. (The band did a few high profile TV performances of some of these songs, but the ones I found we're lip-synched.)

The vast majority of the songs here originally appeared on the Move's last two albums, "Looking On" and "Message from the Country." But they didn't even play very many of those for the BBC. Luckily, they did three different songs for German TV show "Beat Club" in studio conditions (not in front of an audience), so I was able to include those too.

UPDATE: On April 13, 2020, I updated the mp3 download file. I added the song "California Man." Because it's a BBC performance from 1972 and I previously didn't have anything from that year, I had to change the album title and cover art. I also removed the two bonus tracks. I found out that one was just the studio version played on BBC radio, and the other one just didn't sound good enough.

This the last of four BBC Move albums I've posted here, and I'm proud to say that I kept artistic unity across all four, using a different primary color for each. The photo here comes from the Move performing on a TV show called "Whitaker's World of Music" in 1971 (where, unfortunately, they lip-synced).
Posted by Paul at 2:21 AM