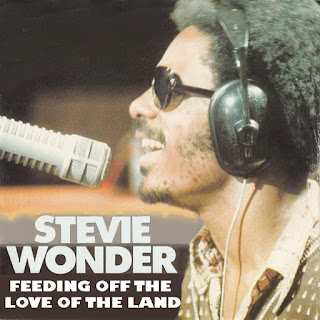 Stevie Wonder had one of the greatest runs of incredible albums of anyone in musical history from 1972 to 1976. But what's frustrating is that it is said he's written literally hundreds of additional songs, including plenty from the 1970s, that still remain officially unreleased, and even unbootlegged.

As an example, in 1974 he released the highly acclaimed album "Fulfillingness' First Finale." But there actually was a "Fulfillingness' Second Finale" album due to be released the next year, but the record company nixed it, fearing it was too depressing. Only one of the songs on it has ever made it to the public in any form ("Feeding Off the Love of the Land" (redone for a B-side in 1991)).

Even more frustrating is that several of the musicians who played on Wonder's magnum opus, "Songs in the Key of Life" in 1976, say they recorded as many good songs that got left off that very long album as the ones that got on it! Arrgh! Why does all this music just sit in the vaults, unheard by anyone?!

Luckily, there are some songs that have made it out to the public. Although virtually no studio recordings have been bootlegged, from time to time, Wonder has played some of his unreleased songs in concert, and sometimes those luckily got recorded. I've already posted an album of stray tracks from 1972 and 1973 mostly made of such songs played in concert, and here's the same, but for 1974 and 1975. (I don't have anything from 1976, because he never toured that year, and in fact didn't tour again until 1979.)

All but two of the songs here are still unreleased. The two are from duets Wonder did on other artists' albums in this time frame. "Take a Little Trip" with Minnie Riperton and "When Your Daddy's Not Around" with Syreeta Wright.

The version of "Take a Little Trip" was written by Wonder, but the version on Riperton's 1974 album features only Riperton singing. However, luckily there's a bonus track on a later version of that album that has Wonder singing as much as Riperton does.

"When Your Daddy's Not Around" unfortunately is only a minute long. Not only is it written by Wonder, but literally every single song on Wright's 1974 album "Stevie Wonder Presents: Syreeta" is written or co-written by him! If you enjoy his 1970s music, you should really check that out. It's like another entire album from him, except mostly sung by someone else. (Wright and him were married for a few years earlier in the 1970s, and she co-wrote some songs on his albums too.)

"I Can See the Sun in Late December" is a song Wonder gave to Roberta Flack, who did her version for a 1980 album. Luckily, Wonder played it himself in concert a few times. "Feeding Off the Love of the Land," mentioned above, is a very rare instance of a studio outtake somehow becoming public.

I've included parts of an oldies medley Wonder played in concert in 1975. I've included his versions of "Ain't Too Proud to Beg," "I Heard It through the Grapevine," "What I'd Say," and "She Loves You." He only plays parts of each song, spending a total of three minutes on the four of them. The medley actually was longer, but I cut out songs that were sung by his backing vocalists, as well as a snippet of "Uptight," since he's played that hit of his tons of times.

Aside from the oldies medley, I believe all the songs are written or co-written by Wonder. So if you want more classic era Wonder, you need to give this a listen!

I've added two bonus tracks, which need some explanation. One is a great version of "Tell Me Something Good," a song Wonder wrote and gave to Rufus and Chaka Khan, who had a number one hit with it in 1974. Unfortunately, Wonder has almost never played this great song himself. I found a really good version of him doing it, but it's all the way from 2017! Thus, it's only a bonus track, since it's so out of place chronologically. But it's remarkable how little his voice has changed, so I think it fits in pretty well with the rest of the music here.

The other bonus track is a stripped down mix of his great song "Living in the City." This is exactly the same as the single version of the official release, except everything is removed but his vocals and keyboards. I really like how it sounds. (I'm not sure where it comes from, but multitrack versions of some songs have been released in recent years for "Guitar Player" and 5.1 versions of songs and albums, so I'll bet it's from something like that.)

For the album cover, I used the cover to Wonder's single "You Haven't Done Nothin'." I obviously had to remove the song title and replace that with the album title. I also had to clean up the photo here and there, since the version I used had some blemishes on it.
Posted by Paul at 3:34 PM