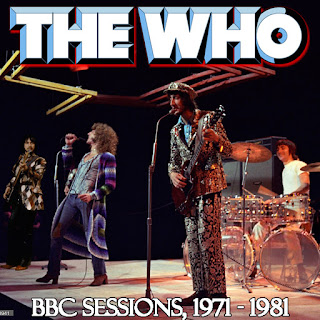 What the heck, here's the third and final album of the Who performing at the BBC.

The vast majority of the songs on first two albums in this series were actually the Who performing at the BBC. In this case, it's only three of eight songs, and possibly two. The reason that I say "possibly two" is because this version of "I Don't Even Know Myself" comes from the Who's official BBC album, but that album doesn't actually make clear what that performance is from. It only says it was recorded in May or June 1971, but it makes no mention of it ever being played on the BBC, or even being intended as such.

Most of the songs here come from other TV or radio performances. The version of "5:15" is a mix of a live performance with some backing tracks. "The Relay" is a similar case, with only the guitar and vocals being different. But there's a twist in that this version lasts a minute longer than the official studio version.

Unfortunately, the Who made surprisingly few TV or radio performances from 1971 onwards, at least those that weren't lip synced. So I had to stretch what I included here to even get a semblance of the highlights of their music career in this era.

"Who Are You" is a unique version that I think was recorded to potentially be included in "The Kids Are Alright" movie, but wasn't used. "Won't Get Fooled Again" is from a concert, but a special concert specifically for footage to "The Kids Are Alright," and it was included in that movie. "Sister Disco" is from a 1979 rehearsal that was filmed for some unknown reason. I included it because I think it's arguably better than the version from the "Who Are You" 1978 album. "You Better You Bet" actually is from a TV performance. It's very similar to the album version, but if you listen closely you'll notice little differences here and there showing that it was actually played live.

The cover photo comes from a TV show at the tail end of 1970. Or maybe I should say "photos" because I actually made this from two photos. I saw two photos of the same performance that were very similar, but in one Keith Moon couldn't be clearly seen, and in the other John Entwistle couldn't be seen. Entwistle was standing directly behind Roger Daltrey, so I erased what little of him that could be seen and pasted in his shape from the other photo.
Posted by Paul at 11:49 PM