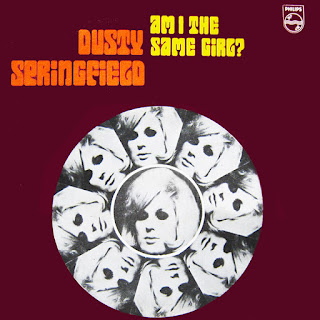 I've said several times in this blog that Dusty Spingfield's 1960s discography is a confusing mess. And that's not even considering her parallel career of numerous TV and radio appearances, where she did a whole different set of songs (check out my "On TV and Radio" series for that).

Just to be clear, these are the 1960s albums I have NOT posted here, since they're fine as they are:

On top of that, I've posted six stray tracks collections, including this one. I posted the stray tracks albums out of order, so it's easy to get confused. Just download everything from her and you'll be fine. ;)

Now that's spelled out, let's get to the music on this album. The first eight songs are from singles, with six out of those eight being A-sides. The remaining five songs are songs that were officially released later, as bonus tracks or on archival releases.

Given the large number of A-sides, it's a safe bet this is a pretty solid album, even if a lot of her singles weren't big hits. (She was entering a period of commercial decline, with a few exceptions, probably because her musical style and looks became increasingly out of step with the more wild hippie trends of the time.) In fact, I'd go so far to say that there's usually little difference between the quality of her album tracks and non-album tracks, because she was a perfectionist with everything she did.

Anyway, note that this does not include all of her stray tracks from 1970. I have some more of those on the next stray tracks of hers that I'll be posting.

For the cover art, I chose the cover of one of the covers for her "Am I the Same Girl" single. I cleaned it up and removed some text on it, such as the name of the B-side.
Posted by Paul at 6:14 PM