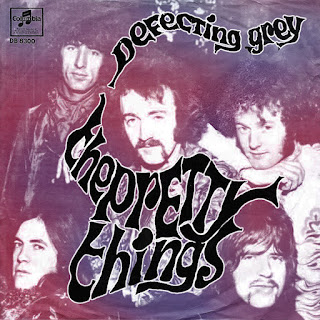 I've posted a couple of albums by the Pretty Things in recent days, and they're very good. But I'm keen to get to this ones, and the ones that follow, because they're excellent. Yet the Pretty Things are a drastically underrated band. Why?

I hope you're comfortably seated, because this is a weird and convoluted story, but an interesting one. Starting out as a rocking band steeped in soul and the blues (very much like the Rolling Stones at the time), the Pretty Things changed drastically for their 1967 album "Emotions." Then they changed again for the music on this album, which is where they dove headlong into psychedelic music. It turns out this type of music plays to their strengths.

Unfortunately, some of their best songs were only put out on little-noticed singles, such as "Deflecting Grey" and "Talkin' about the Good Times." The B-sides to those singles, "Mr. Evasion" and "Walking through My Dreams," were just as good or better, but even more obscure. They also had a strong song, "Turn My Head," that they only played once for the BBC and didn't release until decades later. (There is a rare studio version, but the audio quality is low, so I've included the BBC version.)

But here's where it gets weird. The band was barely hanging on financially, because their singles and record sales were dismal. In fact, from 1967 through the rest of their career, virtually nothing they would release would even make the top 100 singles or album charts in the US or Britain! To make ends meet, they recorded records under another name, "The Electric Banana."

They began putting out albums with this name, about one a year. But these albums weren't even available for sale for the general public! Instead, they were targeted at entertainment insiders, for possible use as background music in low-budget films. The idea was to have songs audiences had never heard before that fit with the "groovy" rock sound so popular in the late 1960s. A couple of B-movies did use their songs, and the band even got to perform on screen as the Electric Banana in one, "What's Good for the Goose," in 1969. Check it out at YouTube. (Search for the band name plus "Mod Discotheque Scene.") But mostly, their Electric Banana songs were used for soft-core porn films! 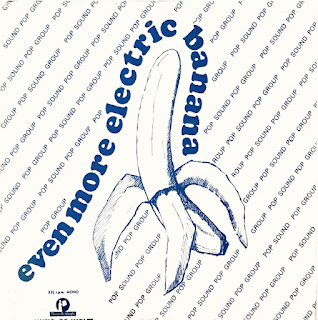 This is all very strange. I don't know of any other 1960s rock band that did something similar. But what's frustrating is that many of their songs that came out on these Electric Banana albums were just as good as the songs they were putting out as the Pretty Things, but there was virtually no way for record buyers to get their hands on them. And even if they somehow did, the albums were a poor value, because each of them had one side of songs with vocals, and then another side of the exact same songs with the vocals removed, since instrumentals work well as background music in movies.

The band put out the album "Electric Banana" in 1967 and "More Electric Banana" in 1968 under their alternate name. (There are additional albums by that name, but I'll deal with those in later posts.) Ive taken what I consider the three best songs from the first one and the four best songs from the second one and added them here. (In doing so, I think I only left three songs with vocals behind.)

Rock bands were very prolific in the late 1960s, typically releasing an album a year, or sometimes more. (Creedence Clearwater Revival actually released three studio albums in 1969 alone!) The Pretty Things might have made a little food money with their weird Electric Banana scheme, but they would have been much better off in the long run putting that music out under their own name, to build up an impressive overall discography. As this album shows, they easily had enough songs for a solid album between "Emotions" in early 1967 and "S. F. Sorrow" in late 1968. That would have been key to show audiences at the time that they were on top of the new psychedelic sound.

For the album cover, I used the cover of the "Deflecting Grey" single as the basis. I carefully removed the name of the B-side ("Mr. Evasion") which snaked above the head of the band members just like the A-side song title. But the cover still looked blah, in my opinion, with an ugly pea green wash over a black and white photo of the band. So I darkened everything and changed the color to purple, but varied it up with swaths of blue and red. That left the lettering hard to read, so I surrounded those with white. Now I think it's a cover that's worthy of the psychedelic music inside.
Posted by Paul at 1:03 AM