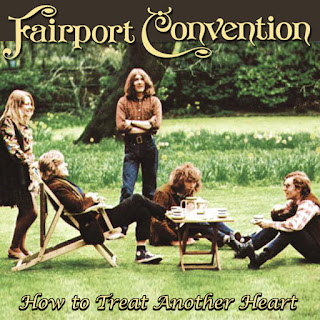 Here's another stray tracks Fairport Convention album. The band had so many songs that didn't appear on their studio albums that this is the third such album I've made that at least partially is from 1968.

This is more of the same very good stuff. Like the last album in this series, most of the songs here are cover versions. I believe the only originals are "Shattering Live Experience" and probably "Billy the Orphan Boy's Lonely Christmas." (That one hasn't been officially released so I can't check the credits, but nobody else seems to have done a song by that name.)

The band still was very much fascinated with American folk-rock, doing songs by Bob Dylan, Leonard Cohen, the Byrds, Gene Clark, and the like. But the last few songs are outtakes from the 1969 "Liege and Leaf," and one can seem them pivoting to their version of traditional British folk.

It's been a long time since I made this album, so I don't remember why I gave it the title "How to Treat Another Heart." I probably didn't think any of the song titles made for a good album title. The title I used are part of the lyrics to the song "Shattering Live Experience."

The album cover photo comes from a photo session of the band in Sandy Denny's parent's backyard.
Posted by Paul at 10:53 PM