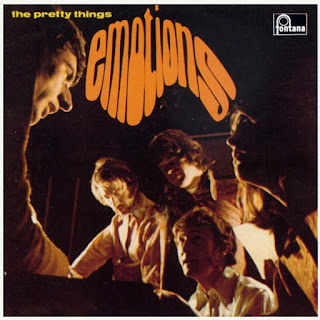 Since I've been listening to a lot of the Pretty Things, here's another album from them.

I'm very happy with what I've accomplished here, I must say! "Emotions" is a 1967 album from the Pretty Things that wasn't well received when it came out, and was almost immediately disowned by the band. They've been critical of it ever since. I hope I've tweaked things to come up with a version that would meet their approval, and hopefully yours as well.

There's an interesting story behind this album. In late 1966, the Pretty Things were on a commercial decline. Their rocking R n' B msuci was going out of style, and musical tastes were drastically changing fast. They owned one more album to their record company Fontana Records. Fontana wanted hits from them, and forced a producer on them, Steve Rowland who had made some hits for a couple of lightweight bands. The band members tried their best to go along with the record company's demands, writing songs in a new style and acquiescing with the producer's methods, which was to slather horn sections and strings all over the songs.

Keep in mind that this was 1967, and the new psychedelic style often had very ornate production. Consider how drastically the Rolling Stones changed their style for one album that year, "Their Satanic Majesties Request," to fit in with musical trends. (The Stones would soon disdain that album of theirs as well, although I think it's a really good one.)

The good news was, the Pretty Things wrote a very good bunch of songs, proving they had the talent and versatility to go beyond R n' B. But the producer way overdid it with the strings and horns, badly undermining the songs. Two band members were so upset that they quit the band in frustration in the middle of recording the album, never to return. The band never played any of the songs from it in concert (except one, "Children," and that only briefly). The album did poorly commercially, so all the selling out was for naught, but at least the band was done with their Fontana record company contract. They would go on to greater things with their next album ("S. F. Sorrow").

Luckily, it turns out that various archival releases have included alternate versions of most of the songs, stripped free of the strings and horns. I was able to find alternate versions for eight of the twelve songs. Of the remainder, two of them don't have that much overproduction. But you will definitely notice the horns on the first song, "Death of a Socialite," and the strings on another song, "Growing in My Mind." Overall,l this is much closer to how the band wanted the songs to sound, before the producer went wild on them.

Since the band has continued to express their frustration with this album even to this day, I'm kind of surprised they haven't made an alternate version just like this one. The alternate versions I found were scattered all over the place. Perhaps if they search their archives they could find alternates for the remaining four songs as well, and fully undo the mistakes of the past.

For the album cover, I simply used the cover for the officially released album.
Posted by Paul at 2:50 AM