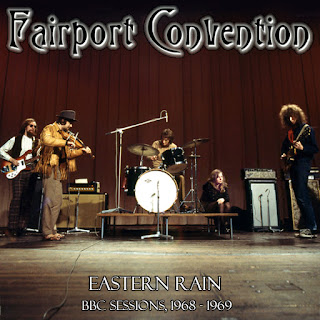 I said I had a lot of Fairport Convention to get caught up on, and I meant it. Here's the third album from them today. The other two I posted were stray tracks collections. This one are all songs from official albums, but performances from the BBC.

Sandy Denny joined the band midway through 1968. All but two of the songs here are from 1968, but they're all from after Denny joined. She sings lead on most of the songs.

The vast majority of the songs here come from the early 1969 album "What We Did on Our Holidays." There's only two from "Unhalfbricking" ("Cajun Woman" and "Who Knows Where the Time Goes"). But some songs are from the other stray tracks albums I posted. In those cases, they had two different BBC performances of songs they never put on album, so I put one of those on a stray tracks album and another one here. "Reno, Nevada," and "If It Feels Good, You Know It Can't Be Wrong" are examples of that.

The great thing about late 1960s Fairport Convention was that they were an awesome covers band, but they also wrote some of the greatest songs of all time. Two classics are here in their unique BBC versions: "Who Knows Where the Time Goes" and "Meet on the Ledge."

There's a serious lack of good Fairport Convention color photos from 1968, or even 1969. Luckily, I was able to find one I liked. The photo used for this cover comes from a concert in Cophenhagen in 1968.
Posted by Paul at 11:04 PM