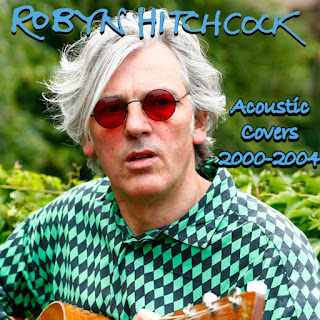 Here's the fourth of my album collections of acoustic covers done by Robyn Hitchcock, the vast majority played live. He's played a million covers, so there are a lot more albums like this one coming soon.

It's not too hard to guess that the three biggest musical influences on Hitchcock have been the Beatles, Bob Dylan, and Syd Barrett of Pink Floyd. So it's fitting (though totally coincidental) that this album starts with three songs by the Beatles, then two by Dylan, and two by Barrett. Furthermore, later in the album, he does another song by Barrett ("Baby Lemonade") and another by the Beatles ("Happiness Is a Warm Gun").

Here are the rest of the songs, and who did them first:

The song there that wins points for obscurity is "Wah-Hoo." It's a country song that dates back to the 1930s.

None of the performances on this album have been officially released, though two of them come from a DVD about Syd Barrett. Yet the sound quality is generally quite good. One the first song, a version of "I Am the Walrus" by Hitchcock and Grant Lee Phillips, there's some crowd noise because the two of them are having a fun lark with the song, which gets a lot of audience response. It's similar with "Stayin' Alive," which is another jokey lark (including some improvised lyrics).

For the album cover, I wanted to use a photo of Hitchcock with an acoustic guitar at some point in the years 2000 to 2004. But I couldn't find any good ones that were definitely from that time. I found one from 2006. I guess that's close enough for horseshoes.
Posted by Paul at 12:19 AM