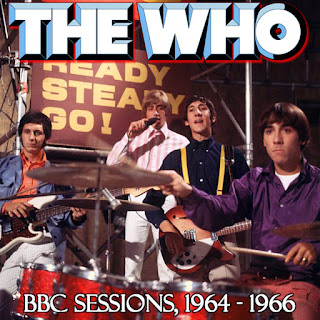 It occurred to me today that I somehow forgot to post my collection of the Who performing at the BBC. So I'm going to try to fix that in a hurry. There is an official album called "BBC Sessions,," but my albums differ from that in two key respects: 1) I carefully removed all instances where BBC DJs talked over the music, and B) I've removed some songs that didn't belong and added some others that fit. That turned a double album into a triple album. Here's the first one.

The official BBC album mostly got things right, but it included a couple of BBC performances that were exactly the same as the studio records. It inexplicably missed a couple of BBC performances, such as "Our Love Was" from 1967. But the biggest difference between that and this is that I stretched the concept to include other TV or radio performances the Who did when they were actively putting out new music (meaning from 1964 through 1982). In the time frame for this album, they did some actual live performances for "Shindig" and "Ready Steady Go," not lip-sync versions that were common at the time.

On top of that, I've included something that was recorded with the intention of being shown on TV, but apparently never was. In 1964, back when the Who was still known as "The High Numbers," the band's managers videotaped a short performance at the Railway Hotel in London. You can find the full video on YouTube, and it's fascinating. It's startlingly good quality considering the time period and the fact the band was barely known and playing to a small crowd.

Frankly, a lot of that 1964 footage isn't very good musically. For instance, Pete Townshend wasn't that adept at lead guitar yet. But I've chosen the three best songs that weren't done in better versions by the band at other times. The band actually did get to play on British TV in 1964, and they played one of these songs, "I Gotta Dance to Keep from Crying." But the recording is lost, apparently, so this will have to do instead. Note on these High Numbers songs how vocalist Roger Daltrey was going through a phase of trying to sound like Howlin' Wolf.

I ordered the songs chronologically, except for the first one, which is a jingle the band made to promote themselves on the BBC, in 1967. It seems like a fitting way to start.

Oh, and there's one  song played for "Ready Steady Go" that sounded rougher than the others, so I've only included it as a bonus track.

For the cover art, I found a photo of the band playing on the "Ready Steady Go" TV show, which should be obvious from the sign in the background.
Posted by Paul at 5:09 PM

Email ThisBlogThis!Share to TwitterShare to FacebookShare to Pinterest
Labels: 1964, 1965, 1966, BBC, Pete Townshend, Who