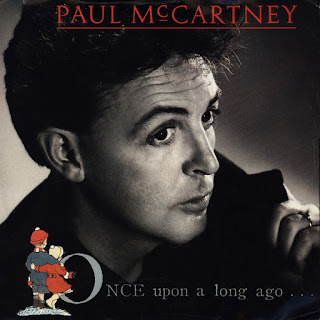 I've been too busy to post here for the last week or so. I'll try to make up for that by posting a bunch of stuff in the next couple of days.

From a couple of articles I read, Paul McCartney was very disappointed by the poor critical reception and sales to his 1986 album "Press to Play." He realized he'd been coasting musically, and resolved to try harder. It turns out he recorded an album's worth of songs in 1987, but hardly any of it has been officially released. Instead, he kept recording and started a songwriting collaboration with Elvis Costello. He finally came back with his "Flowers in the Dirt" album in 1989, which got a better reception.

So what about his 1987 recordings? There's a popular bootleg of them known as "Return to Pepperland." Frankly, I don't like a lot of it, and I didn't include some of the songs. McCartney was trying to sound hip to current musical trends, which meant drum machines, too many synths, and other 1980s musical production crimes. But some of the songs were good, and it's surprising that they seem to have been forgotten by McCartney.  For instance, he released a 3 CD deluxe version of "Flowers of the Dirt" in 2017 that included all sorts of things, but the only material from 1987 were some demos he did with Costello that year. If he ever does a deluxe version of "Press to Play," it seems likely these songs won't fit there either.

This album starts with "Once upon a Long Ago" and its B-side. This song was a top ten hit in Britain and some other countries, but oddly wasn't even released in the US.

Most of what follows is still officially unreleased. The only exceptions to that is the song "Love Come Tumbling Down," which was used as a B-side in the 1990s, and  two acoustic demos with Elvis Costello that came out as part of that "Flowers in the Dirt" official release. I'm including these two demos, "Shallow Grave" and "I Don't Want to Confess," and not some others, because these two songs weren't officially released by McCartney in the 1980s.

Tow of the unreleased songs are not like the others. Those two are "Lawdy Miss Clawdy" and "Don't Get Around Much Anymore." McCartney made very few live appearances for the vast majority of the 1980s, up until his world tour in 1989. These two covers of songs from the 1950s and 40s are from one of those rare pre-1989 live appearances, when he played a few songs on a TV show in 1987.

The rest of the unreleased songs are all originals. I think there are a lot of good songs here. Frankly, I much prefer these songs to the ones on "Press to Play." I think he would have been smart to use some of these on his next album. But by 1989, they probably were old news to him, and he was more excited about his more recently written songs.

I've made major edits to two of the unreleased songs. Both "Atlantic Ocean" and "Squid" go on for six and a half minutes in their original versions. That's too long, in my opinion, because the songs have a lot of repetition. So I cut "Atlantic Ocean" down to four minutes and "Squid" down to three and a half. I'm pretty confident that if McCartney released them at the time, he would have cut them down too.

I've included one song here are a bonus track only, "Beautiful Night." That's because I like to have these stray tracks albums filled with songs that aren't on any official albums, and "Beautiful Night" was released on his "Flaming Pie" album in 1997. But that was a different version done a full decade later, so I figure it's worth checking out this version too.

By the way, I have another album I plan to post here that consists just of all the 1987 acoustic demos McCartney did with Costello.

For the album cover, I simply used the cover to the "Once upon a Long Ago" single. It may seem strangely familiar to you, because it has a lot of similarity to the cover to his "All the Best" greatest hits collection. For instance, it uses the same color and all-caps font for the text, with an underline, and also having a black and white photo. But it's a totally different photo.
Posted by Paul at 6:31 PM