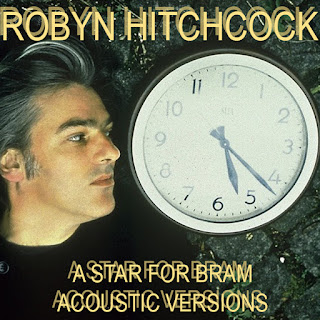 Here's the next in my long series of Robyn Hitchcock albums. This is the type where I made an all-acoustic version of one of his studio albums.

This album is based on "A Star for Bram," released in 2000. That album was pretty much the leftovers from "A Jewel for Sophia." The connection was made obvious by the album covers, which are nearly identical except for different colors. However, "A Jewel for Sophia" is one of his very best albums, so it's not surprising that even the leftovers make up a very good album.

I was able to find acoustic versions for 9 of the 12 songs on "A Star for Bram." The sound quality varies. The first song probably has the worst sound. But most of them come from soundboards and sound very good.

It's a short album, only 35 minutes long.

For the cover art, I could only find one color photo of Hitchcock that I knew for sure came from 2000. It's a strange picture of his face up next to a clock, but that's okay, because he's a strange guy. ;)
Posted by Paul at 4:40 AM