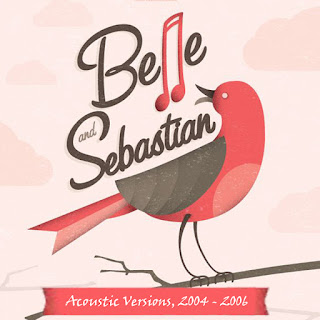 If you've been following this blog for a while, you've probably noticed that I really like acoustic music. In my opinion, if a song is really good, it almost always will still be impressive being stripped way back to reveal what's there at the core.

This is my one and only Belle and Sebastian acoustic album. For a band that generally does mellow, acoustic-y music, there are surprisingly few recordings of them going all the way acoustic. Perhaps that's because they're a fairly large band, with seven members. But I've found next to no recordings of band leader Stuart Murdoch just playing his songs on an acoustic guitar. That's strange, because i think they'd sound great that way. If I've missed something, please let me know.

Anyway, they have done some acoustic performances, but almost all of them are from 2004 to 2006. (Two songs here are from 2016 and 2017.) I'm not sure why only those years, but something is better than nothing. Maybe some of it was just luck, because in one case they were scheduled to do a radio show and they mentioned they played acoustic that time because the drummer failed to show up!

Generally speaking, these are the original songs the band is best known for. At one point, they do a cover of "Teenage Kicks" by the Undertones, but it's just a lark that only lasts a minute. Since Belle and Sebastian is a band, these generally are band performances, but with acoustic instruments and usually no drums.

In terms of sound quality, everything here sounds fantastic. The vast majority come from in-person radio appearances, and those nearly always sound like studio recordings. Three of the songs come from concerts, but very small ones in cafes, and the sound on those are just the same as the rest.

For the cover art, I wanted to use a photo of the band playing acoustically. But I couldn't find any good ones from the time period of most of the songs here. So I went with using the art from one of the band's concert posters instead. That seems more in keeping with the band's cover art style anyway. I believe this particular poster comes from their 2015 tour.
Posted by Paul at 10:57 AM