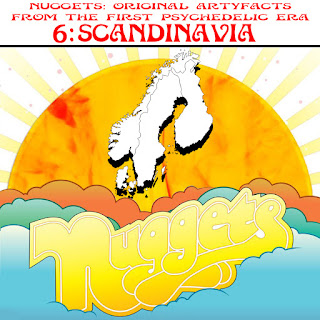 Generally speaking, I'm been focusing on posting stray tracks collections from prominent artists. But I have a lot of other things I plan on posting eventually, including many various artists collections. I've posted several collections of what are called "nuggets," which are mostly garage rock-type songs from more obscure bands. Rhino Records released two excellent box sets of such material, but those mostly focused on American and British bands. I was intrigued to find more of the songs from other countries.

This album deals with the "nuggets" from Scandinavia. I define that as Denmark, Norway, Sweden, and Finland. I must admit I don't know the music of Scandinavia from the 1960s that well. But I have found a bunch of songs I like a lot, all of them in English.

I would like to especially point out the song "Naked When You Come," by the Lollipops. Apparently, the Lollipops were a Danish boy band, which made a bunch of forgettable, derivative pop. Yet this original song is a serious classic to my ears.

This collection also has four songs from the Tages, a more serious group from Sweden. They were known as the Beatles of Sweden, and with good reason. Obviously, they weren't as good as the Beatles (who were?!), but they may have been the best 1960s band in Europe outside of the British Isles. If you like their songs here, you should check out their album "Studio," which is excellent.

If any of you know of some really good songs from Scandinavia that fit with this style of music, please let me know and I'll consider adding them to this collection.

I have more albums in this series to post, covering other parts of Europe, and beyond.