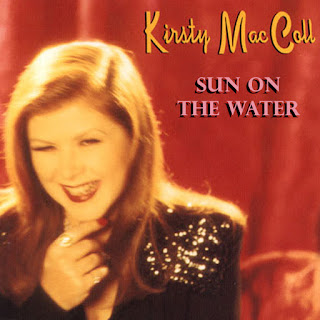 Here's the last of my Kirsty MacColl stray tracks albums, going to her untimely murder in late 2000. I have mentioned previously that I think her musical career just got better and better as she got older, in contrast to most musicians who tend to peak early. So out of all of the stray tracks albums, I think this one is the strongest.

In the last few years of MacColl's life, she spent a lot of time in Latin America, and that led her to incorporate Latin musical styles, especially Brazilian musical styles, into her own music. This can be clearly seen on her last (and best) album "Tropical Brainstorm," released in 2000. Not surprisingly, many of the songs here have that same influence. She even covers a song by the great Brazilian composer Antonio Carlos Jobim ("Insensitive").

But she had many other influences, and those can be seen here as well. She also does covers of songs by the Isley Brothers ("Harvest for the World"), Randy Newman ("Sail Away"), and Ian Dury and the Blockheads ("Hit Me with Your Rhythm Stick"). But the rest of the songs were written by MacColl. One song, "Celestine," appears on her "Tropical Brainstorm" album. But this is the demo version, and I think it's different enough to merit inclusion.

Speaking of demos, I also am departing from my usual ways by having the same song appear twice, "Sun on the Water." That was the last song she ever wrote and recorded, right before her death. I think it's an excellent song, and the demo is fairly different from the studio version, so I've included both versions here. The rest of the album is in rough chronological order, but I didn't want to have two versions of the same song close to each other, so I have the versions start and end the album.

For the album cover, I used the cover to the 1995 single "Caroline." I erased the title and changed the text.
Posted by Paul at 10:25 PM