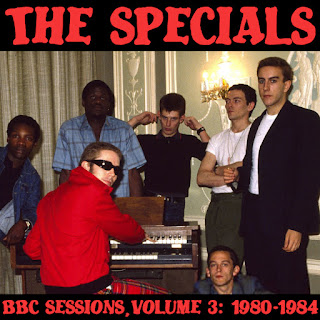 This is the third and last of BBC sessions albums for the Specials.

The Specials in their late 1970s/early 1980s prime had two distinct phases. The change happened around 1981 with some big personnel changes. Most importantly, lead singer Terry Hall left with two others to form the band Fun Boy Three. But crucially, the main songwriter Jerry Dammers remained. The change was so significant that the band was renamed "Special A.K.A." But I prefer to still call them "the Specials" for simplicity's sake.

Anyway, after this change, the band hardly did any live appearances. One big problem was that Dammers wasn't much of a singer. So there tended to be guest singers, including some women, which was new for the band. The original line-up is still here on the first six songs, with Hall as lead singer.

Six of the songs here are officially released, from the album "BBC Sessions" (tracks 3 through 5 and 7 through 9).  Those also are all proper BBC studio sessions. I've augmented them with songs from British TV shows. The first two songs and the seventh are from BBC shows. "Why" actually is an unreleased studio outtake. But I thought it was worth including, especially due to the lack of alternate versions of such songs from later in the band's career.

The last song, "Free Nelson Mandela," is particularly interesting. First of all, it's a classic song that had a powerful political effect. But what's interesting about this version is that it was actually performed with Elvis Costello, plus Dave Wakeling and Ranking Roger from the English Beat. That was not the case on the studio version. If you listen carefully, Costello sings most of the lead vocals.

The cover photo is from 1981, before the personnel changes mentioned above.