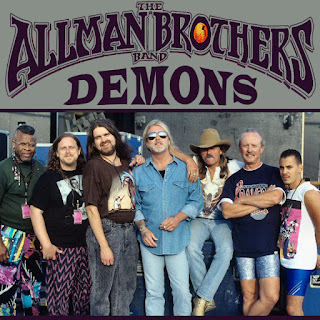 Here's the next in my series of stray tracks albums for the Allman Brothers Band.

In 1982, the Allman Brothers Band broke up, and it seemed like they were done. Their musical style seemed out of date with musical trends of the time. They reunited for a few shows in 1986, but otherwise most of the 1980s were a lost decade for them. That started to change in 1987, when lead singer Gregg Allman had an unexpected hit with the song "I'm No Angel." Then, the band's career-spanning box set "Dreams" was released in 1988 and sold very well, showing there still were many fans interested in the band's music. As a result, they reunited and went on tour in 1989, remaining an active band until 2014, not long before Allman died in 2017.

The band put out an album of all new songs in 1990 called "Seven Turns." None of those songs were played in their 1989. However, they did play  five of the best songs from recent albums by band leaders Gregg Allman and Dickey Betts. These live recordings make up a majority of this album. I think it's nice to have Allman Brothers Band versions of solo songs like "I'm No Angel." Luckily, I was able to find a really good soundboard bootleg as a source. I managed to remove most of the audience noise, so these sound close to studio versions.

I've supplemented those with some other songs, so this can be a "best of" for the late 1980s. The first song, a cover of the blues classic "Key to the Highway," is by the whole band, and comes from one of their 1986 concerts. This was done as an encore during a benefit concert with some other big acts, so guitarists Mick Taylor, Stephen Stills, and Carlos Santana joined in, and adding guitar solos. Gregg Allman sang most of the song, but Stills sang a verse, and someone else sang another, though I'm not sure who that was (neither Taylor nor Santana were known to sing much).

For most of the other songs, I have a choice between live versions from bootlegs or the studio album versions. I generally chose the studio album versions, due to sound quality. Some of the solo albums around this time were marred by typical bad 1980s production, but not on these songs I chose. However, "Can't Get Over You" also comes from a live bootleg of a Gregg Allman concert, since the Allman Brothers Band never did that one.

Currently, I haven't put any more stray tracks albums of the band after this one. They put out three albums in the early 1990s, but then didn't do much new music after that, releasing only one more studio album in the last 20 years the band was together. I might be able to scrape together some live covers and solo material, but I haven't looked into that yet.

This album is 51 minutes long.

I couldn't find any good color photos of the band iu 1989. So I used one of them from 1991, which I figure is close enough, especially since they had the same band members. I took the band name design from some promotional material related to their 1989 tour.