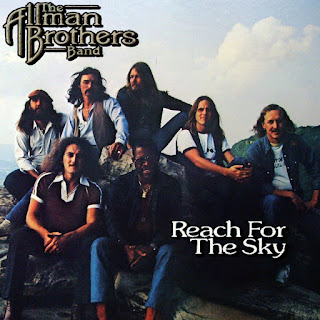 In 1979, the Allman Brothers Band reunited with most of their surviving original members after having a few hard years apart in the late 1970s. They put out a new studio album called "Enlightened Rogues," and successfully toured behind it.

I'm not going to do anything with that album because I think it's an excellent album, so if you're a fan of the band, you should have it. Maybe there aren't any really classic songs on it, but every song is solid. Also, it's great that even though it was 1979 and the Southern rock style the band had helped pioneer was out of fashion, they avoided updating their sound with disco drumming, synths, and the like. It sounded exactly like the Allman Brothers Band of the early 1970s.

Unfortunately, the same couldn't be said of their next two albums, "Reach for the Sky" in 1980 and "Brothers of the Road" in 1981. The band's long-time record company went bankrupt in 1979, and their new record company pressured them to modernize their sound. The band gave in to some extent, and had a Top 40 single in 1981 with the song "Straight from the Heart." But this new direction is widely considered a terrible decision today. The band members weren't happy. They broke up in early 1982 because they felt they were embarrassing themselves and ruining their musical legacy. They wouldn't reunite until 1989, after the 1988 box set "Dreams" summarizing their career showed there was still a market for their type of music.

In my opinion, those 1980 and 1981 albums are pretty bad, and probably the worst ones they ever did. BUT! Many of the songs on them are actually good. It's just that they were ruined by bad production, and bogged down by some poor songs. Their hit "Straight from the Heart" is a case in point. It has synths and female backing vocals, and sounds like a song by Journey or Foreigner that happens to be sung by Gregg Allman. I didn't include it here because it's best forgotten.

So... what to do about the bad production on some otherwise good songs? Luckily, because this band's live work is so popular, there are soundboard bootlegs of concerts even from these lean years. I've created an album that uses live versions for six out of the ten songs. I could have included even more live versions, but I decided in a few cases that the studio versions were actually better (especially in terms of sound quality), and in a couple of cases the songs weren't done in concert, so I had no choice.

Technically, I'm calling this an alternate version of their 1980 album "Reach for the Sky," but that's a stretch. Only the first four songs here originally come from that album. The fifth, "Nancy," is a great Dickey Betts demo that was first released on the "Dreams" box set. (He made demos for a 1981 solo album of country songs that didn't fully fit the Allman Brothers Band sound, but the album remains unreleased except for this one song.) The remaining five songs originate from "Brothers of the Road." To be honest, the main reason I'm calling this an alternate version of "Reach for the Sky" is because I couldn't find any good photos of the band from this time period except for the one on the back of the "Reach for the Sky" album. It would be more accurate to call this the best songs from everything they did in 1980 and 1981.

Before I put this album together, I didn't think much of this time period for the band, and I didn't know most of these songs. But I must say, I'm pleasantly surprised by what I've come up with. By using mostly live versions, the Allman Brothers Band actually sound like themselves. And many of these songs are really good and could have become concert staples if they didn't date to this time period that the band is so eager to forget.

Note that I made edits to a couple of the songs. For "Mystery Woman," the lead vocals were low in the mix, so I used the audio editing program X-Minus to bring those up. And for "The Judgement," the studio version is only three and a half minutes long, whereas the band turned it into a great jam in their concerts that usually went on for over ten minutes. But those long versions typically included a drum solo in the middle, and those have limited appeal, so I edited most of the drum solo out. But that still leaves the song five minutes longer than the studio version.

Also, note that one song that gets included on some best of collections is "Hell and High Water" from "Reach for the Sky." For instance, it's included in the band's "Trouble No More" 50th anniversary album. But I didn't include it because it's a nice song... until you realize it has many similarities to the band's earlier big hit "Ramblin' Man." That bothered me enough to keep it off.

The official cover of "Reach for the Sky" is dumb, if you ask me. It features a kid in a mask and cowboy outfit riding a rocking horse. (Why?!) But the back cover features a nice photo of the band, so I used that for this cover. I used Photoshop to edit out some text (I put the album title over that spot), and also to crop and sharpen up the image.