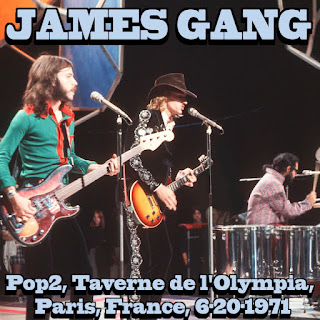 The other day, I was listening to music by James Gang, the group led by Joe Walsh in the late 1960s until 1971, and I felt the urge to hear something by them that I hadn't heard before. So I went to check the wonderful world of bootlegs. But it turns out there's very, very little that has excellent sound quality. So I gathered all of the best sounding stuff and made a live album out of it. Five out of the nine songs come from a show broadcast by the French TV show "Pop2," so that's what I'm calling this. But about half of the total length comes from other sources.

As I was saying, it's shocking how little well recorded live music exists from James Gang, unless there's some buried in record company vaults that's still locked away. (I speak of the time Joe Walsh led the band until late 1971, since in my opinion he was the heart of the band, being the lead singer, lead guitarist, and main songwriter.) There is one official live album from 1971 called "Live in Concert." But that, plus these songs here, seem to be all there is in soundboard or radio show quality. There are some audience bootlegs, including one from the Fillmore West in 1970 that purports to be a soundboard, but the sound quality isn't up to what I would expect.

To make matters worse, although the vast majority of classic rock acts from this time period have released bonus tracks, deluxe editions, super deluxe editions, box sets, and so on, James Gang hasn't had any of that at all. As far as I can tell, there's been no archival material released whatsoever, ever since the time Walsh left the band. I highly doubt this is due to bad blood between the band members, since the original James Gang has gotten together for musical reunions every now and then. Maybe Walsh just isn't interested, since it seems to be exactly the same situation with his solo career.

Whatever the case may be, Walsh has had legit "guitar hero" skills, so it's a shame there aren't more recorded examples of him wailing on his guitar. At least we have some very good examples here. The first song is an odd one. They took "Jeff's Boogie," a relatively short instrumental by the Yardbirds, and supersized it to the point that one might argue it's actually a medley of songs. One can definitely hear parts of the songs "Over, Under, Sideways, Down" and "Think about It" (both by the Yardbirds also) and "I Feel Fine" and "Blackbird" by the Beatles. It was done in a studio for a radio station in 1968, so there's no crowd noise.

The next two songs also date to 1968. By some random chance, the band was recorded in concert with high sound quality, even though it was just before they went to record their first album. There might be more recorded, but I doubt it because I checked all the usual places and this was all I could find. Note that "White Summer" is an instrumental by the Yardbirds (who seem to have been a big influence). Only a short bit of it is played at the end of a long version of "Bluebird," originally by Buffalo Springfield.

The remaining songs except for the last one come from "Pop2," the 1971 French TV show mentioned above. Unfortunately, it seems to have only been a half-hour long show, with time further reduced for introductions and commercials. There also were a couple interview sections between songs that I haven't included. So we're left with only 20 minutes of what must have been a longer show. The beginning of the first song, "Stop," is not included, but I edited it a way so that hopefully that loss doesn't sound so jarring. I also added some applause at the end (taken from one of the other songs), since there was a quick cut at the end with no applause. Happily, all the other songs appear to be complete and include the applause.

A video of this can be found on YouTube (though I took it from a better quality source), so you can watch it as well. As far as I can tell, it's the only surviving film footage of James Gang from the Walsh time period, except for a performance of "Walk Away" on the German TV show "Beat Club." (I didn't include that because it's quite similar to the version of "Walk Away" from the Pop2 show.)

The last song, "Tend My Garden," comes from another 1971 bootleg, recorded in the Netherlands. Weirdly, there were only two songs on this bootleg, and the other one was a version of "The Bomber" that's version similar to the version from Pop2, so I didn't include it here.

If you add it all up, there are 55 minutes of music here. If anyone knows of other live recordings by the band in this time frame that has similar sound quality, let me know and I'll add it in.

The cover photo shows the band playing for the British TV show "Top of the Pops" in 1971.