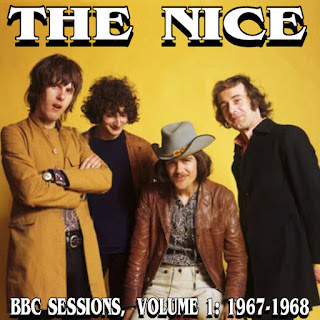 I have to say up front that I'm not much of a fan of the 1960s British band the Nice. They had their moments, but they also suffered from some of the later excesses of prog rock. In fact, their leader, Keith Emerson, would go on to be a part of Emerson, Lake, and Palmer, a band that also had their moments but was notorious for prog rock excesses. That said, I'm committed to cleaning up and organizing all the 1960s BBC sessions from key bands that I can find, so here we are. I found enough for three volumes.

There is an official BBC album for the band, simply called "BBC Sessions." All of the songs here come from that, with one exception. That exception is "Azrael (Angel of Death)." I tried to augment their BBC performances with other songs done on other TV or radio shows. That performance is unreleased, and comes from the French TV show "Bouton Rouge."

More "arty" bands like this one tended to get on different BBC shows, which meant less contact with DJ Brian Matthew and his annoying habit of talking over the music. The first three songs do have the usual edits from such talking, but they're the only ones.

The strength of the Nice was in their instrumental work, not so much their vocals. So it's not that surprising that six of the eleven songs here are instrumentals.