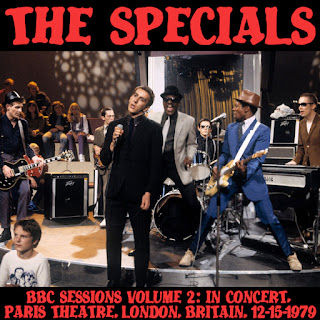 A while back, I posted Volume 1 of the Specials performing for the BBC. That consisted entirely of BBC studio sessions from 1979 and 1980. This consists of many of the same songs, except this time they're from a live concert broadcast by the BBC. If you want a live album of the band when they were doing their early, energetic ska stuff, this has both top notch sound quality and performance.

The one bummer about this is that it's rather short, at only 34 minutes. But I believe it's the full show, as that was all the time the BBC gave them, and there were other acts on the bill.

The cover photo obviously shows the Specials being filmed for some TV performance, but I don't know the details.