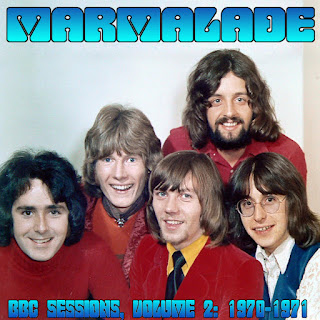 I've posted a bunch of Marmalade albums here. I think they're an overlooked band. Here's the last thing I plan on posting from them. It's the second and final BBC sessions album.

For the first of their BBC albums I posted, every single song was officially released, from an album simply called "BBC Sessions." But for this album, absolutely none of the songs are officially released.  Also, in contrast to that first album, which was all recorded in the studio, the vast majority of this one was recorded in front of audiences.

The first two songs come from a BBC TV show hosted by singer Julie Felix. I've included "Ob-La-Di Ob-La-Da" from that show even though I included a version of that on Volume 1, because this version is done as a duet with Felix. So I figured that was different enough to merit inclusion.

The fourth through sixth songs aren't from the BBC at all. There was a music show called "Doing Their Thing" on a rival British TV station at the time. These three songs are from that. You can find the whole half hour performance on YouTube, including some other songs I didn't include here because I did include BBC versions of them. This is just about the only footage I know of featuring the band playing live.

Most of the rest of the songs, tracks 8 through 13, come from a concert the band did for the BBC. As you can see from these songs especially, the band was moving towards more of a rocking sound. This can be seen by the last song, "Who Needs Ya," which is a cover of a Steppenwolf song. That's a far cry from a medley of Simon and Garfunkel hits earlier on this album.

This album is 50 minutes long.

The cover photo is a promotional photo related to an appearance the band did on the British TV show "Top of the Pops" in 1971.